She was called the "Future of Furry Music" by Pepper Coyote.[3] 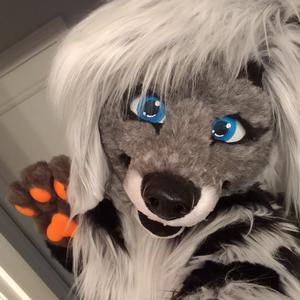 Being invited as a musical guest, she made her debut at Texas Furry Fiesta 2020 with her first ever concert to promote her newly released album Double Take. She was also a judge at the dance competition, which had the now infamous #testicles incident, which became the most hashtagged TFF related thing that weekend. She has said TFF is now her favorite American con.

Her final con of 2020 was VancouFur 2020. This was the last con before the pandemic struck and cancelled all upcoming events. She performed her song Sakura in the talent show, and performed "La Voix" by Malena Ernman in the third annual Cutie Pageant, and got 2nd place. It was also the first time she had to cancel her flagship panel SurviFur due to poor scheduling. She also judged the dance competition and participated in Floor Wars by request to fill out the non suited bracket, though she was knocked out in the first round.

She performed her first online concert as part of Confuror 2020 which had cancelled it's physical con as part of the COVID-19 pandemic. She also judged the dance competition where she coordinated her audience participation vote for the first time fully online.

Cassidy entered the virtual variety show for Further Confusion 2021, where for the first time she finished in first place for the music video of her song "Sakura". This became her first ever talent show win at any con and first top 3 finish at FC after two previous attempts. She also had her first concert of the year on the Sunday of the con, also being her first concert at FC.

She also did a digital concert for Fur Squared, for which there was an encore performance due to stream quality issues. She also performed for virtual iterations of Blue Ridge Furfare, Furnal Equinox, Texas Furry Fiesta, Fur The More, Confuzzled and Nordic Fuzzcon.

However, against all odds she announced she would be going on a 6 convention tour during late summer 2021, starting with Megaplex 2021 where she performed only her second ever concert on a convention main stage. As well, she also made a surprise appearance in Pepper Coyote's concert which was ironically called "Alone in Florida", where she was let to sing 2 songs before being joined by Pepper to debut their new collaboration "Raise A Glass" for the first time publicly. A song she herself penned. The song will not be released until ANW 2021.

Immediately after she went to Furrydelphia 2021, where she performed another concert, this time on a smaller scale, as well as doing her signature Transformation Chat panel and her SurviFur game spontaneously in the con's board game room. She also participated in the talent show and dance competition, despite missing the auditions for the latter.

Next up was DenFur 2021 where she did yet another small scale concert, Transformation Chat, and SurviFur, which unfortunately was scheduled for 10am, which she protested and ultimately bailed on, later learning there had been 18 people waiting at the panel room to play. She considers it her biggest regret of the tour so far. She also participated in the dance competition yet again.

Fourth was Texas Furry Siesta 2021, another first time convention but second time hotel as it was in the same venue as Texas Furry Fiesta 2020. Despite not performing a concert, she still managed to run a season of SurviFur in the prematurely dismantled Game room. It was the second and final season she ran during the tour. There was no dance competition.

Fifth came Tails and Tornadoes 2021, becoming not just her first attendance but first time in the state of Oklahoma. Despite an unfortunate start on Friday, she came back in full swing and went on to run another tf panel, place 3rd in the Dance Competition (becoming her first ever placement in a dance comp), and be an auctioneer at the charity auction. She also made her second guest appearance in a Pepper Coyote concert where they yet again performed "Raise A Glass".

And the final con stop on her tour was Furvana 2021. As a last hurrah, she judged the dance comp in suit and helped auctioneer the charity auction once more. There was also a tf panel on the beach for the ten people who could find them at the beach. Once done the con she attempted to cross the border back to Canada without a negative COVID test, was denied and ended up with a warning and having to spend $250 USD on an accepted rapid test. She finally returned to Canada on September 14.

As a producer and songwriter, Cassidy has been submitting for the Eurovision Song Contest. Submitting from 2015 to 2022 annually, for the countries of Norway, San Marino, Azerbaijan, Armenia, Czech Republic, Poland, Switzerland, Macedonia, Ireland, Malta and Moldova. She's continuing to write and submit new music for the contest, working with foreign musicians as well. On May 12, 2020 she became the first ever fursuit to ever in the 60+ year history of Eurovision to be featured in the Eurovision Song Contest, being shown in the first and second ever fan recap for the Semi Finals since the event had been cancelled with the ongoing COVID-19 pandemic.

In addition to music, Cassidy also has an interest in art, drawing, and directing. She sketches and draws occasionally, mostly for storyboarding her music videos. She attended a summer course on Animation in 2016 which taught her some things, but mostly put her skills into perspective. She has taken on a new creative role as the director and partial storyboard artist for her upcoming animated music videos.

She primarily works as a movie extra when not at cons.