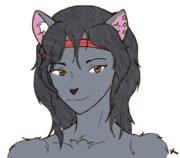 Caryas is a writer and musician who specialises in electronic, ambient, video game and chiptune-style music. He plays a number of instruments, including but not limited to: guitar, banjo, mandolin, piano, bass guitar, drums, spirit flute, and the ocarina.

Caryas was born in Ohio. He grew up in southern Ohio. He has had a large background in music, picking up piano, guitar, and electronic production. He continued to widen his musical experience with jazz guitar lessons. Recently his music has become popular enough to begin selling albums, and to date Caryas has released two full length albums as well as over one hundred free songs. 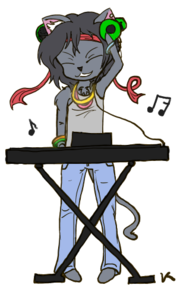 Caryas uses FL Studio, Audacity, and ModPlug Tracker in electronic music making, and produces music in a wide number of genres. His usual domain is SoFurry, but he also has accounts on other media sites (including Fur Affinity and Soundcloud) where he uploads his works.

Caryas' fursona is a panther. He stands around 6' even, wearing jeans and some plain t-shirt, (if a shirt at all). He usually has a red headband on. Lately he's been sporting headphones more often in pictures. His fursona previously had a pirate theme, which he dropped in 2011.