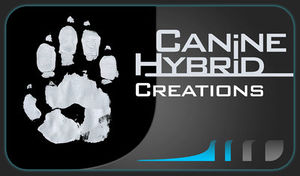 CanineHybrid is the online username of Riley Michelle Carbaugh (born 1990), a native of Colorado, USA. She is an artist who has received a Bachelor of Arts degree in Media Arts and Animation from the Art Institute of Colorado. Riley is primarily a digital illustrator and fursuiter/maker represented as either a shapeshifting dragon or as a "canine-hybrid" character, a German Shepherd crossed with a dinosaur.

Riley formally operated as CanineHybrid Creations, which was officially adapted in August 2007 and state registered as a trade name in 2010. The business specialized in a variety of creative services: including design, character artwork, creature costumes, & animation, often hybridizing these artforms together to create unique projects.[1] An online webstore offered a variety of molded and cast products intended for incorporating into the construction of creature suits. CanineHybrid Creations had obtained dealer's room space at RMFC each year from 2010-2015.

Unfortunately on April 21, 2015, she lost ownership of CanineHybrid.com to domain hijacking and was inspired to adjust her branding, choosing the name Creatureneer, LLC on August 6, 2015. The slogan is "We engineer creatures!" Creatureneer is a small business that specializes in bringing unique characters to life as wearable creature suits for cosplay and performance art. Services include concept design, illustration, sculpting, molding, casting, animatronics, and sewing.[2] Creatureneer had a dealer's table at RMFC 2016 and opened a new Etsy-based webstore focused on selling shirt designs in late June 2017.

Riley officially re-branded to Mythimorph Studios, LLC on August 01, 2018. The slogan is "Design, Create, Transform!" She is a vendor under this name at DenFur 2018.[3] 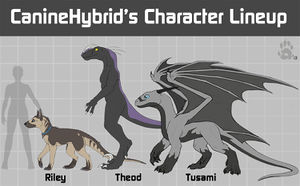 Riley has created several characters that are commonly associated with her work or identity and often have their own social media accounts and followings. The most notable are: