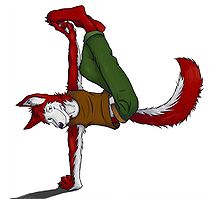 Camo Rovak (a.k.a. Camo) is a furry who is known for making YouTube videos. His fursona is a red and gray husky. He has been a part of the furry fandom since late 2007. Camo's YouTube channel was created in 2009 for fursuit videos. The first one was posted from FurFright 2009. Currently, his videos has gotten a total of over 4 mil. views and channel has more than 30K subscribers. Later, Camo started posting videos to Vine until it shut-down on Jan. 17, 2017.

Camo does not own any fursuits.