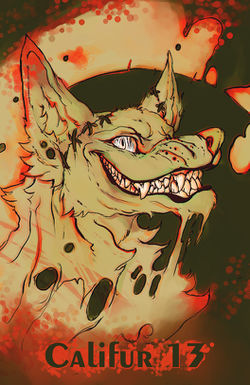 Califur 2017 was the fourteenth iteration of the Califur convention. It was held over May 19-21, 2017,[1] moving into May to avoid clashing with Biggest Little Fur Con 2017 and to make use of cooler temperatures.[1] The venue was again the Fairplex Sheraton in Pomona, California.[2]

The seriousness of the tone of the messages prompted the venue to increase the security fee by $25,000 and the demand for the con to strike the babyfur panel (also impacting the venue's concerns was a nearby PETA protest, which ended up being unrelated to the convention,[5] but caused law enforcement to be on the scene of the convention). Califur had the choice of canceling the con but went ahead and agreed to the terms.[6]

It was determined later that calls to the hotel were made by members from the AltFurry Discord, a Discord chat group for "Alt Furries", a social/political group who align themselves with alt-right ideologies and movements.[7][8] The attack was based on an Alt Furry Discord consensus that the babyfur panel was pedophilic in nature, and the group's founder, Len Gilbert/Furred Reich, has encouraged such tactics on his YouTube channel, since deleted.[citation needed] Also, the AltFurry Discord's Twitter (maintained by Len Gilbert) sent the hotel sexual cub-related art drawn by Jaga Fuxfell via Twitter, portraying it as an example of what would be featured in the panel.[9]

Alt Furry's management first tried to deny their involvement,[10] then downplay their hand in it,[11] finally blaming others for it.[12]

Some[who?] have mistakenly reported that the calls were part of a campaign by the Furry Raiders,[citation needed] due to the fact that Raiders leader, Foxler Nightfire, being associated both with the alt-right and with the AltFurry Discord,[citation needed] and there is some overlap of membership, but the groups are distinct, and Len Gilbert and his members are not Raiders.