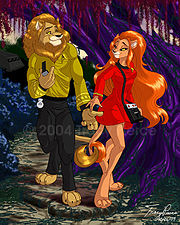 A couple of Caitians on the 'prowl' (art by Neverwench)

Caitians are a fictional species first featured in Star Trek: The Animated Series (abbreviated as TAS). Modeled after African lions, Caitians stand bipedally on digitigrade feet. They also have excellent hearing and night vision, although their facial structure and vocal biology make it difficult to speak English properly. Their feline appearance includes a mane and tail which match their lion counterparts.

M'Ress, the Caitian officer in the series, remained popular for years after the end of the show, and was the unofficial inspiration of Freighter Tails and stories by Paul S. Gibbs. M'ress, with her cat-like voice patterns and her anthropomorphic features, represents one of the first "furry" characters shown on TV, one that was neither a person with cat ears nor a talking cat.

There are various data sources for this species available, although these sources were never considered canonical for the Star Trek universe and probably never will. There is still debate among fans on whether they are canon or not, as people claim the furry characters seen at the end of Star Trek IV: The Voyage Home were intended to be Caitians. 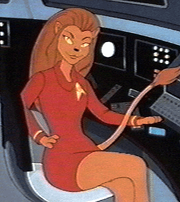 M'ress at the communications console of the Enterprise
Other references made in Deep Space Nine and Enterprise seem to indicate a slow acceptance of this species becoming part of the canon. This acceptance is hinted primarily through the TAS episode Yesteryear. In this episode, Spock had to jump back in time to save his child self and had allowed for more background information to be added to the character. This information was accepted as canonical as far as Spock's character was concerned and the rest of the episode was omitted. However, as a general rule of thumb by Paramount, only the events that have taken place within the live action episodes or movies are considered canon.

The Caitian race is unofficially related to the Kzinti (see also Wikipedia), though one of the few pieces of information relating to the species states that they are a Kzinti descendant. The Animated Series had one episode that also featured Kzinti as a separate species, The Slaver Weapon, written by Larry Niven based on an older work. 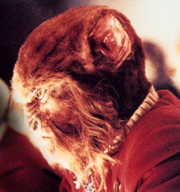 From Star Trek IV: The Voyage Home.
This crossover between Star Trek and Niven's Known Space is one of the reasons The Animated Series is non-canon: reconciling the two universes would make for messy bookkeeping, and would cause licensing issues. Furthermore, at the time that Paramount was introducing the new Star Trek Movie universe, they did not want to deal with the huge realm of loosely monitored associated properties; for simplicity, the word from above became that only live action Star Trek was canonical. [1] (Originally, some people at Paramount only wanted movie-era imagery and continuity to be the new official Star Trek, to have even tighter control, but this proved impossible.)

A few furries who enjoy Star Trek are particularly fascinated by this race, and some even play a Caitian on any Trek MU* that has them. However, the Star Trek TV series have very few species with fur and in fact, only two movies featured such furred characters. 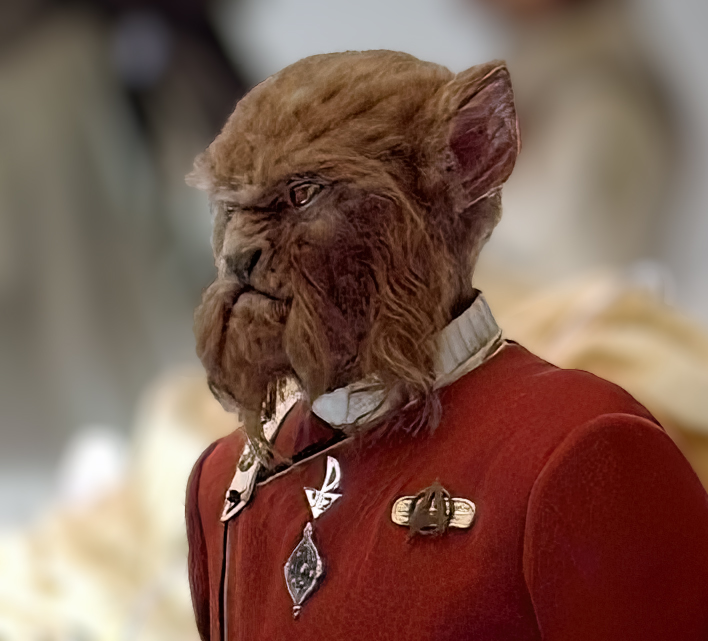 A Caitian Admiral from Star Trek IV: The Voyage Home
Recently, Paramount Pictures was bought out by Viacom and the Star Trek franchise was handed off to subsidiary CBS to market and produce. A newsletter to members of the series's official website has claimed that a major discussion was occurring concerning making the Animated Series canon. The discussion came down to a poll whose result shows that the majority of the fan base is in favor of making the Animated Series canon. This is not necessarily an indication that it will be canon as both Gene Roddenberry and Paramount Pictures in the past have said no to the idea, but the new management of the Star Trek franchise may decide to follow the fanbase feedback and declare the series canon to appease the fans of the show. 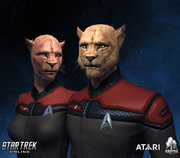 In June 2010, Caitians were added as a purchasable playable race in the Star Trek Online MMO web store. Their appearance was modeled after the Star Trek IV cat people, not the Animated Series version.

An alien feline race called "Caitians," inspired by but not intended to be identical with the Star Trek Animated Series version, is featured in the Chakona Space setting.