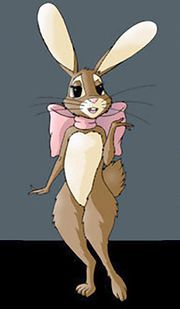 The Cadbury Caramel Bunny, also known as simply the Caramel Bunny, is a mascot rabbit character featured in several advertisements in the UK for the Cadbury's Caramel bar during the 1980's. She was voiced by British actress Miriam Margoyles with a west country accent.

Collection of commercials featuring the bunny

The Caramel Bunny appeared in several animated shorts, in which she appears as an attractive, curvaceous figure who watches those around her busying about their daily routines, before suggesting that they relax with a Caramel bar and take things easy, all the time being ogled at because of her extreme beauty.[1]

In 2009, the Caramel Bunny was revived after twenty years of inactivity to advertise Cadbury-brand chocolate in the UK during the easter season. Several posters were erected, featuring a slightly redesigned Caramel Bunny, now being advertised with the slogan "Still got it."[2]

At about the same time as this revival, the Scottish newspaper Edinburgh Evening News voted the Caramel Bunny the third sexiest cartoon character of all time, with Betty Boop in second place and Jessica Rabbit in first place.[3]

The Caramel Bunny is a young female rabbit with a light chocolate-brown coat, cream-coloured fur around her eyes and on her underbelly, tail, muzzle, hands and feet, and a soft blush to her cheeks. She has expressive hazel-brown eyes with long eyelashes, a small pink nose, six thin whiskers, and an attractive, curvaceous figure; with wide hips, a fluffy cotton tail, and long, slender ears, legs, and feet. She usually wears a large pink bow around her neck and pink lipstick, and in later advertisements released to promote Cadbury Caramel Nibbles, she would also wear a frilly white summer dress and bow patterned in the style of the aforementioned sweets.[4]