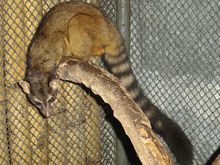 Ringtail, also known as a cacomistle, is the common name of Bassariscus astutus, a North American omnivore of the family procyonidae (which includes the raccoon, the coatimundi, and the Kinkajou, but not the giant panda as was once widely believed).

Common from the Oklahoma Panhandle to Southern California, these nocturnal creatures are seldom seen and tend to be shy.

They are small, usually under 30 inches in length with as much as half of that length being their large, striped tails. Their fur is usually brown to buff in color, with white "mask" markings over their eyes, and black fur on their ears marked by white spots.

The last of these names comes from the days when prospectors in the western United States kept ringtails to control the rodent population; if raised from a kit, tame ringtails proved to be both good pets and outstanding mousers.