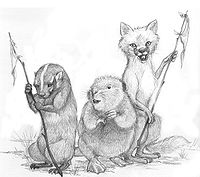 Buck, Mountie and Bramble in the "Club With No Name", illustration by Dawn Doughty

Byron on Wells is a furry novelette by John Burkitt, aka EveningStar Foxworth set in C.S. Lewis' world of Narnia. Where the popular Chronicles of Narnia series deals with a series of crises that occur during the history of that rather furry world, Byron on Wells is set during a period of peace and prosperity and deals with the joys and concerns of the "riverbankers" in a small town.

Focus of the Work[edit]

The novelette is in narrative form, the memories of an old beaver's childhood friends and adventures. The tone of the book is lyrical and affectionate, more like a conversation than literature, and it can be summarized easily by its last paragraph, a fixture of audio performances of chapters on the NarniaFansCast podcast series:

Proper meshing of characters, character traits and timelines was facilitated by copious notes and dendrograms. The Foxworth family tree, in particular, traced five generations of foxes, some of which were only mentioned once or twice. The aim in writing the novelette was to give the story a certain Tolkeinesque feeling of being dropped into an ongoing community with hints as needed to engage the reader without insulting his/her intelligence. By starting at a leisurely pace, the author made matriculating into the storylines relatively painless.

Names were chosen to have an intentional similarity to human names while also bearing a resemblance to certain things and customs familiar to the species of animals. For example the badger "Buckthorn" (unfamiliar) which shortens neatly to "Buck" (familiar), the beaver "Timberly" (unfamiliar) which shortens to Tim (familiar) or beaver family names reminiscent of tree names like "Aspinall" (aspen), "Barkby" (bark) and "Beecher" (beech).

"Riverbanker" vocabulary was designed to be easy to read and understand in context. An endless talker is a "breezer", a clerk may be off one moment but "back in a wink" the next, and you'd best be wearing your "Tim Tucker" if heading into a "brave storm." And if you're eating at the table of Crystal Beaverlee, you won't get a "nibble" but a real "rib sticker" before you're done. The use of completely invented words was kept to a minimum.

The story centers around the childhood experiences of Mage Mountebank Beaverlee, an elderly beaver who serves as advisor to King Caspian X but who misses his life along the riverbank. In a series of fond reminiscences, he stumbles maladroitly through the journey we call maturing in the company of his best friends Bramblewood Foxworth and Buckthorn Badger. Bit by bit you see the subtle but powerful forces that diverted Mountie from the ordinary life of a beaver into the world of politics, far removed from his riverbanker roots. Clearly marked through the stories are Mountebank's tendency to retain his riverbanker character even as he absorbed the collected wisdoms of sages and explorers.