busybee comics is a collection of various comics written and drawn by fluffy. There are a number of different kinds of comic with various subject matters, but the majority of them are stories in the "Unity" universe.

After giving up on its previous webcomic "Eaveston," fluffy decided to take a step back and started doing occasional journal comics as part of her blog. Eventually, she had a dream[1] which inspired her to start on a new comic series, "Pernicious,"[2] based on the exploits of two mismatched kids living in an abandoned science lab going through a number of webcomic clichés.

After losing interest on Pernicious, fluffy started making random one-off comics and posting sketchbook entries, and since she had a category system she folded the old journal comics into the archive as well.

Eventually, fluffy started another series, "Unity,"[3] about the creatures living in a long-abandoned human colonization ship. This series arc lasted exactly 255 strips, and eventually led to other stories taking place in and around the ship, such as "Planetfall," "Breeder," and "Meat." At the same time as "Unity" came "Womble," a semi-abstract series of one-offs involving the Womble and the Duchess.

After completing Meat, fluffy had a period of depression and stagnation, which she broke out of by starting a new sub-section of Journal called "Good Things," where any day in which no other comic is made ready, she draws something good (or at least amusing) that happened that day. This continued with alarming consistency (only missing a handful of updates) until late November 2011, when fluffy took a business trip to Tokyo and couldn't keep up with the schedule. 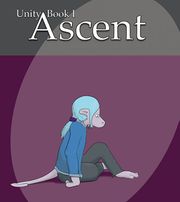 Thanks to a successful Kickstarter drive, the first compilation of Unity strips, entitled Ascent, was published in March 2012.[4]