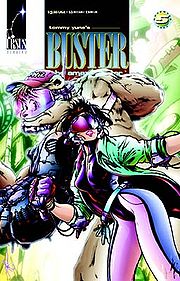 Buster the Amazing Bear is a comic book series created by Tommy Yune in 1993 about a baby bear cub who is genetically altered in a laboratory accident and transforms into an anthropomorphic superhero.

The style of the action and humor in the comics is initially reminiscent of Phil Foglio, drifting towards an anime look over the course of the series. The final issue of the first story arc had a cliffhanger ending and some promotional artwork from the second series can be found on the web.

Buster maintained a presence at ConFurence through much of the 90's. However, with Yune working on Speed Racer and now Robotech, the date of Buster's return to comics is undetermined.