BunFur, also known as the Bundaberg Furmeet or the BundyFur Meet, is a monthly furmeet which takes place in Bundaberg, Queensland, Australia.

BunFur used to run annually around mid-year in 2012 and 2013, but, by the same time in 2014, there were no announcements of an event that year. Eventually, the website went offline.

As of June 20, 2020, the website is operational again and meets are switching to a monthly format.[1] Yearly events are still off due to the COVID-19 pandemic.

The first Bundaberg furmeet took place on August 12, 2012.[2] It came into existence when local furries Bingo Fox and Maui the Dingo decided to go fursuiting before the summer arrived.[3]

This small event for two evolved into a more general get-together for local furries. After being advertising on Facebook and various furry websites, the meet grew almost to the point of being a small convention.[3] New furries came to light in the Bundaberg area, and the event was also attended by furries from Brisbane and Gladstone.

The event was mentioned in the local newspaper[2][4] and television[5] reports. 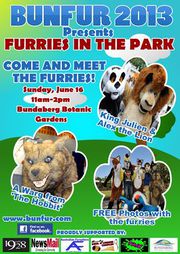