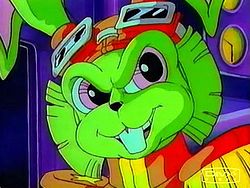 Captain Bucky O'Hare is a green hare native to the alternate dimension known as the Aniverse. He is captain of the spaceship Righteous Indignation, and the main hero of the comic book series, cartoon, and video games(s) Bucky O'Hare and the Toad Wars. He fights against the evil Toad Empire who want to take over the Aniverse and enslave all mammal species, and having lost all of his family except for his Aunt Iris and Cousin Jeffrey to the toads, he is more than willing to wage an one-rabbit war against the Empire.

And despite the assistence of an able-bodied crew Bucky does indeed fight a nearly one-rabbit war, due to the Secretary General of the United Animal Federation's staunch refusal to commission more than three ships (Bucky's is one, the other two are the Indefatigable and later the Screaming Mimi), but he manages all the same. At the beginning of the series the toads have conquered his homeworld, Warren, using a climate converter, but by the final episode Bucky has not only managed to free his enslaved people but also reverse what was done to Warren so that the hares may resettle.