This is about firefighting furry in UK. For other uses of Bucky, see Bucky (disambiguation). 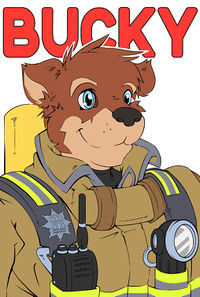 Bucky, also known as Bucky Otter' and Ninjahorse (born 1987), is a UK furry artist, writer and RAF firefighter who lives in Hampshire, England.

Bucky's first encounter with the furry fandom was the discovery of Bob Drake's art on Bob's personal website in 2000. However, Bucky only became truly involved in the fandom in 2006 after moving to Leicester to attend De Montfort University, where he met fellow student and well known furry artist Ressie.

Bucky started drawing and writing furry material before becoming involved in the midfurs meets and community in 2006. He started attending the London meets the same year and met his former fiance Lapushka/ {Lappie} at an after party held to celebrate Lappie's 18th birthday.

Lappie and Bucky lived together for over three years and shared an apartment with fellow furs Ressie and Kibs, and lived in the same apartment building as Semaj and Xani in the arts quarter of Leicester city center. The furry residence was a success, however, the group disbanded in 2011 with Bucky moving back to Suffolk to pursue his career as a firefighter.

Bucky all but disappeared from the fandom between 2009 and 2011 due to work reasons, however, he has recently[when?] started playing an active role in helping Drayke Blayze and Kaidron Dragon organize and host the East Furs meets.

The name "Bucky" comes from the nickname he earned at the university for having a US country boy accent. His general username is Ninjahorse, which was inspired by his original horse character and his former hobby of the Kuk Sool Won martial art, in which he holds a first dan black belt.

Bucky is a North American river otter, but until recently 2011 took the form of a shire horse character.