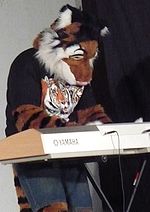 Bucktown Tiger (born January 08, 1983), real name Josh Hill, is a lyricist, keyboardist, and comedian who specializes in furry-themed hip-hop songs, voiceovers, and freestyles, as lead shopwrecker of Paw Recognize Paw Studios. Bucktown's filksongs include "Ridin' Furry", "In Da Con", and "Going To A Furcon," and he is the author and composer of Orange and Black: The Furst Album, which includes "Rolling Up Coins" and "Throw Your Paws Up", Shop Music, which includes "Get a Furst Life" and "Tigers Run the Shop", and Scritching the Ivories, which is a collection of popular songs covered by Bucktown on the keyboard. Bucktown has performed his music live at numerous furry conventions, including Oklacon, Furry Fiesta, Morphicon, Mephit Fur Meet, and Rocket City Fur Meet and also performs regularly on Ustream. Bucktown was named as a Guest of Honor at Morphicon in 2009, at Oklacon in 2011, at Mephit Fur Meet in 2011 and at F3con in 2013.

A networking engineer and recent MBA graduate, Bucktown resides in Little Rock, Arkansas, where he has been active in the Central Arkansas Furs Association since its inception in 2005. Bucktown takes his moniker from the nickname of his hometown of Brinkley, Arkansas, where his family lives. Bucktown is mated to Leo Lovely of Little Rock, who was named Mystery Guest of Honor at Rocket City Fur Meet in 2009.

Bucktown Tiger owns one fursuit of his character, a Siberian Tiger. Bucktown's suit was designed and constructed by Kiwihunter with an emphasis on music performance, and the suit made its debut at Mephit Fur Meet 2007. Bucktown has done several live musical performances in his suit, including concerts at Megaplex, Anthrocon, and Furry Connection North, as well as various variety show appearances.

Bucktown's comedy performances include appearances in the Ranting with 2 competition at Rocket City Fur Meet, in the Flea Collar Comedy Tour at Mephit Fur Meet alongside Tahamaki, Adric Verminus, Isfacat and Deyna T. Otter, and at the Oklacon Comedy Show with Isfacat.