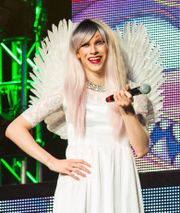 Brenda Banks (a.k.a. Ben, formerly Benchilla, born October 1992) is a drag queen from Philadelphia, Pennsylvania. Since joining the community in August 2008, they have attended over 50 furry conventions, where they are best known for judging, hosting or competing in many dance competitions. They currently reside in Seattle, Washington. 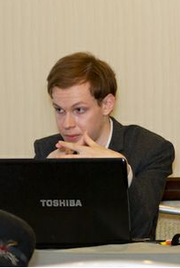 Brenda introducing Weasyl at their panel at AC 2012.

Although aware of the furry fandom since 12, Brenda didn't officially become a member of the community until they were 15.[1] This lapse can be attributed to their involvement with the wiki Encyclopedia Dramatica, where they were an active member from December 2006 to February 2008, and a Sysop from July 2007 to January 2008. Brenda has gone on record as saying that they're "glad" they grew past their involvement with the site, citing displeasure with "harassing people online while trying to claim other people are losers" [2].

After leaving the site, they gradually became more immersed in the furry community, joining Fur Affinity in October 2008. From May to November 2010, Brenda served as a moderator on the Fur Affinity Forums before quitting to focus on other endeavors. In 2012, Brenda was banned from FA after exploiting a bug that permitted avatars larger than the permitted size. Initially, it lasted for two weeks, but this was made permanent due to "previous history of hijinks" [3], despite having no prior ban history.

In January 2012, Brenda co-founded the social art gallery Weasyl, alongside Kihari, who is the website's primary creator. Together, along with the rest of the staff, they ran a successful crowdfunding campaign to launch the site that pulled in over $6k, with the site formally launching on September 30th, 2012. Brenda served as co-owner of the site until January 2014 when he resigned due to accusations of a Weasyl founder sockpuppeting on FA's donation drive journal [4]. Although Brenda has stated that the accusation is simply a rumor, and to not believe anything without "actual physical evidence" [5], the rest of the staff felt it was best to have them resign for the sake of its future growth. 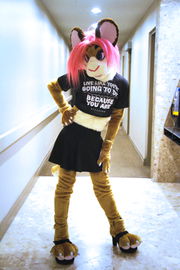 Brenda's fursona is a brown chinchilla. Its design has changed very little over the course of its creation for a decade. Although the character was initially presented as a male, upon the subject's discovery of drag, the character began presenting as both genders. On June 2017, Brenda commissioned Jolteon Kitty of Gold Ribbon Studio to make a suit of their character.

Much like Brenda's fursona, the suit can switch between the two genders, possessing interchangeable wigs, removable eyelashes, and two sets of feet, with one pair being constructed around a pair of heel boots. The suit was completed in January 2018 and has since made appearances at several events. In October 2021, the suit was given a refurb, touching up and redesigning several aspects of the suit, including the face and chest.

A still from the Where Them Girls At music video, featuring Aky (left) and Sai (right)

Brenda discovered an interest in drag at MFF 2011, where they were involved in the filming of a music video for David Guetta's Where Them Girls At, which was a collaborative effort between Kwik Cheetah and Char [6]. Brenda plays Nicki Minaj in the video, as they perform behind fursuiters Tesxa Coyote, Aky, and Sai. It was posted on Youtube and Vimeo and as of April 2018, the video has racked up over a total of 100k plays on both sites. Following this, they have appeared in other self-produced music videos, such as "Go Hard" (alongside co-star Scrumpet) [7], which was filmed at FurFright 2012, "Wild Right Now", which incorporated footage from various furry events such as AC 2013 and Rainfurrest 2013 [8], and "Summer Home", which focuses on footage from Further Confusion 2014 [9]. Since 2011, Brenda has attended 40+ conventions in drag. 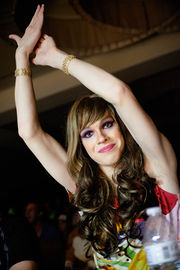 Apart from music videos starring their drag persona, Brenda also specializes in creating films centering around theirs and other's convention experiences since MFF 2011. The most notable example of this is "Further Confusion Twenty Twerkteen", a 90-minute movie filmed at FC 2013 [10], with its sequel, "FC 2014: The Wrektoning", having been their last release. They have also produced numerous videos as commissions for others, such as Rahne Kallon, Storm Husky, and others [11].

Since 2012, Brenda has been heavily involved in the dance community of the furry fandom. They have competed in twelve different Floor War competitions since FWA 2013, with their most successful showing being runner-up at AC 2014 with Dalmy, as part of the team Ratchet Couture. The two would later reprise the team name's moniker at three more Floor Wars events. Their last appearance was at MFF 2015.

In 2014, Brenda began serving as a judge at various dance conventions. The first occurrence was at FC 2014's preliminaries, and their first public appearance as a judge being at the Furpocalypse 2014 Dance Competition. Two years later, Brenda (along with Eaite Randjam) became the show-runner at BLFC 2016 and 2017 for the iterations of its dance competition, having also served as a prelim judge and host, alongside Haku Panther. Since then, Brenda has appeared on numerous judging panels and has done showcases for several of the events they judged at, including iFC, Rainfurrest, ANE, Anthro Northwest, and Motor City Fur Con. As of 2022, Brenda is the organizer for the Further Confusion fursuit dance competition.

Since 2016, Brenda has made appearances at many cons as a DJ, including multiple showings at BLFC, MFF, Furpocalypse, and AnthrOhio, as well as performances at FWA, ANE, TFF, and Furnal Equinox. [15]. Brenda mainly specializes in creating original mash-ups of pop music since 2013 before becoming a DJ. Although the original purpose of creating it was to bypass content filters on YouTube, they have since taken to creating them for performance mixes, whether for themselves or as commissions for others [16].