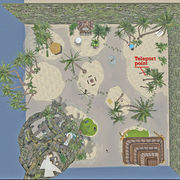 Brazil Furry Island (BFI) is a location in Second Life primarily for furries to communicate in Portuguese.

Island or Virtual Community located in Second Life, to meet furries, fans and admirers. Designed and maintained by the Portuguese speaking furries, is the first community in the Portuguese language.

This virtual Community exists for a long time [1], and was named "Brazilian Furries Community" —"Comunidade Brasileira de Furries", CBF—. In 2008, was named "Villa Of Enchantment" —"Vila dos Encantos". In mid-2009, its name was changed definitely to "Brazil Furry Island" —BFI—, being the continuation of past communities.

The BFI is expanding and constantly improving. In October 2010, moved from land "Cryptomono" to land "Trumbull". In December 2011, it moved to the land "ALEGRIA". Whose location is indicated on the link at the end of the article. The main campus occupies the ground area and also it has Skyboxes, which increases the total area for the community. Near the entrance of the BFI has a device to teleport to floating floors. Currently they are striving to improve the infrastructure. The presence of visitors is welcome.

Here is the access link to the Brazil Furry Island in Second Life.