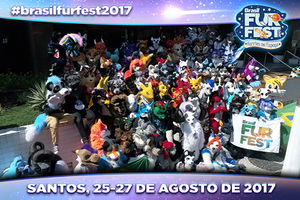 Brasil FurFest 2017 - Furries in Space was the second edition of Brasil FurFest, hosted at Mercure Santos Hotel in Santos, Brazil. The event had its official announcement realized in April 2017 during Furboliche 6, when the official name of the theme was presented: Furries in Space; and as well as the guests of honor. At the time, the event already had 123 registered attendees.

The event began on the evening of August 25th with the opening ceremony that showed a video about friendship, a teathrical piece of a space flight and staffs presented details of the event. After this a night party at the hotel featured a dance floor, lounge decorated based on the event's theme and a bar selling themed drinks.

The weekend was followed by a variety of activities including workshops, panels, furry market, artist's room, Fursuit Parade, fursuit games and a crowded game room with a Super Smash Bros. tournament. On Saturday night, the dance competition took place. It was won by Ambar, Vinny and Crash/Lars in the categories fursuiter, non-fursuiter and doubles, respectively. During the dance competition, the event chairman challenged the audience to donate R$ 500 (US$ 158) to charity and if the goal was met, he would dance to the music of one of the winners. The goal was achieved and the improvised performance ended Saturday night.

On Sunday, the parade fursuit was held in the morning and counted 107 fursuiters. During the course, one of the fursuiters ended up falling and another overheated due to the temperature inside the fursuit. Both were rescued by the medical team of the event and moments later were already rehabilitated to join the activities. The staff announced at the closing ceremony that the parade fursuit will be held again Saturday afternoon to minimize temperature effects.

Guests of Honor were: the artist, fursuiter, fursuit-maker and youtuber, Igor Cebarros; and the professional illustrator, Felipe Marcantônio.

The closing ceremony marked the end of the event and took many furries to tears during special moments. A surprise auction was held for charity and multiplied several times the funds raised for the NGO SOS Vida Pet Baixada Santista, reaching a total of R$ 2,668.10 (US$ 841.67). The staffs of several Brazilian furry events and also the ColombiaFur group team were invited to take a photo together, showing the union of the events in favor of fandom. The final numbers of the event were announced: 287 attendees from 9 countries (Brazil, Argentina, Paraguay, Chile, Colombia, Mexico, USA, Germany and Finland) and the thank you message was made in Portuguese, Spanish, English and Finnish in honor of all those present. At the end it was announced that the third edition of Brasil FurFest would be held again at the Mercure Santos Hotel, between August 17th and 19th, 2018. The theme of the event was also announced: "Lights! Cameras! Furries!".