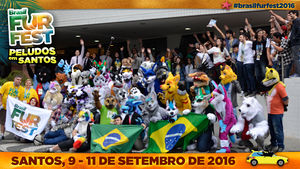 Brasil FurFest 2016 - Furries in Santos was the first edition of Brasil FurFest convention and was hosted at Mercure Santos Hotel in Santos, Brazil, and gathered 169 furries (among them 54 fursuiters) from 5 countries (Brazil, Argentina, Colombia, Paraguay and USA).

The official announcement of Brasil FurFest was done on February 13th, 2016, at Furboliche 5 event. Before traditional fursuit raffle, the staff showed BFF's logo and announced the convention would start as a crowdfunding with a goal of R$ 6,000 (around US$ 1,500) for the basic costs of renting conference rooms and producing conbook, badges and other stuff. Further goals for crowdfunding campaign were later presented for adding more conference rooms or renting party bus in case of bigger donations. Videos and pictures of the location were presented in the several screens of the Bowling Place and all Furboliche staff members were using buttons with Brasil FurFest logo. Before the announcement, a Facebook page was made and teaser videos in Portuguese, Spanish and English were published.

First crowdfunding goal of Brasil FurFest was reached in barely 13 days. In an official announcement on the social networks, the staff of the convention confirmed the event for the proposed dates. At the end of crowdfunding campaign, all additional goals (that introduced more structure and activities to the con) were reached and R$ 15,390 (approx. US$ 3,850) were pledged.

In April 24th, 2016, BFF's staff announced the theme for the event: "Peludos em Santos" (Furries in Santos) - a joke with the name of a very famous Brazilian Rock song called "Pelados in Santos" (Naked in Santos). Guests of honor were announced in the same day 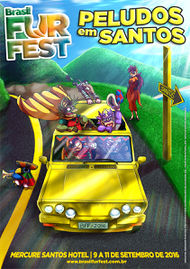 Guests of Honors were El Ranno, a famous designer and illustrator from Brazil and Latin Vixen, owner of Mixed Candy Fursuits, a very well-known fursuit maker from the USA.

During the Opening Ceremony, a video talking about dreams and persistence was presented and the countdown featured the name of furry cons around the world as an inspiration for Brasil FurFest. A videoclip with a parody of the song "Pelados em Santos" with fursuiters was also shown before "My First Convention" panel started telling attendes the details of the event. Furries could be part of panels, workshops, dealer's den, artist's alley, fursuit parade (48 fursuits), fursuit games and a bus party. A Magic The Gathering tournament was also held and won by Casshan Wolf. And at saturday night, a Dance Tournament for fursuiters and non-fursuiters was the main attraction in Porto room. Scamp from Argentina won Fursuiter category and Trent T. was the solo competitor in non-Fursuiter competition.

Brasil FurFest published a daily newspaper called "Diário da BFF" (Portuguese for "BFF Daily") with news from the previous day and trivial informations of the event.

During BFF, donations in total of R$ 435.45 (appox. US$ 119.02, at the date) were collected from participants to help non-governmental non-profit organization, MAPAN (Portuguese abbreviation for: Movement in Support of the Protectors of Animals and Nature), very known in the city of Santos for protecting, feeding and for reinsert abandoned animals in responsible families. BFF is the first Brazilian event to rely on charitable activity, something common in major international conventions.

At the Closing Ceremony, staff announced Brasil FurFest would happen again at the same place in August 2017.