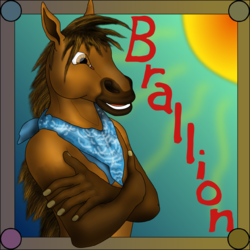 Brallion (born May 16, 1985) is an artist who lives in Texas, U.S.A.[1] His main character is a stallion who wears jorts with a Texas belt-buckle and a blue bandana.

Brallion's fursona is a quarter horse stallion. His height is 5'9", making him shorter than most anthro equines. The term, "pony" fits but it is not preferred. His weight is 160lbs. His colouration is brown with darker tones of brown on his ears, muzzle, arms (starting half-way down the biceps), knees and ankles. Brallion's hair (forelock, mane and tail) is a dark brown. His hooves are a light tan, and his fingernails match his hoof color. His hands are 5-fingered human-proportioned hands, covered in a very fine peach-fuzz. He wears a brand on his left rump-cheek (same symbol as the artist's signature). He was branded in February of 2009 (all prior pictures of Brallion have no brand). The brand is very rarely seen, as it is covered by clothes. His typical attire is: blue bandana, jorts, brown belt with a western-style belt buckle. The belt buckle displays the shape of Texas. Brallion has also been seen in swimming attire, and in scuba gear. The blue bandana is part of his signature appearance. There are, however, a few pictures where he can be seen without the banana (mostly underwater scenes).[2]