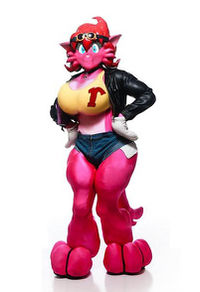 A boobsuit is a fursuit of an obviously female character, normally those with unusually large breasts.

The term is often used when the commissioner or wearer of the suit is male - a common and sometimes incorrect assumption[1] - but in theory applies to any suit with noticeable cleavage.

Some members of the fandom dislike such suits, and often the characters behind them as well. Their reasons can vary from a perceived lack of realism (either size-wise, or because the breasts are unnaturaly perky), to concern over furry fandom's image, or the objectification of women.[2]

Fursuit makers may discourage or outright refuse commissions to create such fursuits, either because they share the views above or are concerned about getting a reputation for mature work.

Others defend them, on the grounds that the suits are realistic depictions of certain characters, the wearers are actually female and of that size, or that there's no harm in it even if it is sexual.

Roxikat's creator has stated that the character was intended as a parody of "lonely male artists", to show "how crazy it would look if your huge-boobed drawing was actually walking around."[3]