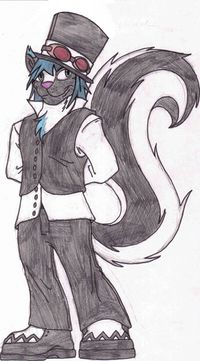 Blue Voltaire (also known as Skunkishblue or Blue, and formerly known as Conor-The-Raccoon) is a furry artist and colorist from Norwich, England.

Blue's fursona is a striped skunk who dresses in a dark cabaret Goth fashion. He has long blue hair and wears a top hat. He had a small blue patch of fur on his chest and blue rings around his wrists.

Blue joined the furry fandom in 2008. His original fursona was a raccoon.

Blue created his first Fur Affinity account in 2009, under the user name "Conor-the-raccoon", but stopped using it in early 2012 when he set up his new account, "Skunkishblue". Blue offers free coloring of digital art, and, as of August 25, 2012, does commissions.

As of 2012 , Blue has started attending furmeets in Norwich, which are organized by Drayke Blaze and Kaidron Dragon on UKFur.org.