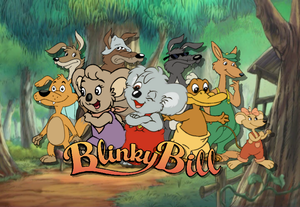 Blinky Bill is an Australian book series written by author Dorothy Wall in the 1930s. The books inspired an animated series beginning in 1993, titled The Adventures of Blinky Bill, which was produced as a follow-up to the 1992 animated movie Blinky Bill: The Mischievous Koala. The animated series, by far the most well-known version of the character internationally, was produced by Yoram Gross and ran for two series from 1993-95 (the second series titled Blinky Bill's Extraordinary Excursion), with a third series (titled Blinky Bill's Around the World Adventures) airing in 2004.

The first season had the townspeople of Greenpatch (a fictional Australian bushland town and the main setting of the series) trying to rebuild their home (after it was destroyed by loggers in the 1992 movie), while coping with a family of playful tricksters and con artists in the form of the town's family of dingoes (who redeemed themselves by the end of the season). In the second season, Greenpatch is fully rebuilt and a story arc formed in which Blinky and his gang get lost while on a school camping trip and have to find their way home. The third season had Blinky, Flap and Nutsy leave Greenpatch and travel around the world in a hot air balloon/caravan with a gang of escaped circus animals, returning the animals to their proper homes while being chased by the circus' owners.

Series 1 ("The Adventures of Blinky Bill")[edit]

After the peaceful bush town of Greenpatch is destroyed by loggers, Blinky and his gang must rebuild it while dealing with a family of con artist-like dingoes.

Continuing on from last season, Greenpatch has been fully rebuilt, and because peace has been made with the Dingo family, Shifty is now an official member of Blinky's gang. However, when Miss Magpie takes Blinky's gang on a school excursion, the kids become lost. Now without their teacher and without a plan, the gang has to fend for themselves in the brutal Australian wilderness, and try to find their way back home.

A circus comes to Greenpatch and intrigues the town, however, the animals are begging to escape and get back to the countries they came from! Blinky, Nutsy and Flap leave their friends and Greenpatch behind, and bring along the circus animals in an effort to return them to their respective countries, but the circus owners, Basil and Cyril, are constantly on their tail, and want Blinky for themselves! With Blinky, Flap, Nutsy and their new friends travelling the world and on the run, the stakes have never been higher!