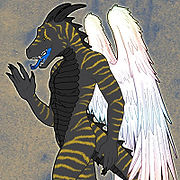 Blaze Xanatos Darkarma, often referred to as the Dragon of Light and Hope or the Dark Quarter-Prime of Lies[1] by Furcadia patrons, is a black anthropomorphic dragon with golden stripes and white, feathery wings that give off an iridescent glow. Blaze's tongue is blue in color to denote his ability to breathe electricity as a weapon in addition to fire and acid. Besides his magickal abilities, Blaze is commonly known as a master shapeshifter.

Blaze has assumed many roles in his lifetime in such games as DragonSpires, Furcadia, and Tapestries; however, it seems that no matter what storyline scene he's in, Blaze will always be a lawful evil villain who is viewed by some as a merciful crusader of the people. 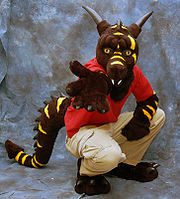 Blaze's fursuit was created by MixedCandy and debuted at Further Confusion 2007.