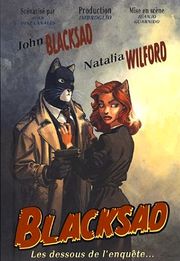 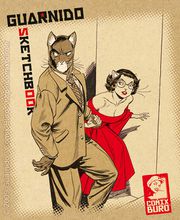 The story is set in a film noir environment, in something that looks like the USA of the 1940s. All of the characters are anthropomorphic animals, their specific species reflecting their personality and their part in the story.

Though it was the creators' first attempt at a comic book, the first volume saw immense success, selling more than 200,000 copies in France. The book was quickly translated to German, English, and Spanish as well. Juanjo Guarnido received a large number of prizes for his impressive, lavish visualisation of the story. Juan Diaz Canales received several prizes as well, among these three nominations for the Eisner Awards in 2004.

In the wake of success, the two creators published a book about the creation of the first volume, entitled Les dessous de l'enquête. In March 2003 the second volume of the series, Arctic Nation, was published.

Main article: Somewhere Within the Shadows

Somewhere Within the Shadows is the first graphic novel of the Blacksad series, published in 2000 for the French market by Dargaud. In the United States, the book was simply retitled Blacksad by now-defunct publisher iBooks in 2003.

In the third volume, Blacksad gets involved with a former Nazi scientist, Communist Sympathizers, and the FBI. This mirrors the 1950's elements of McCarthyism, fear of nuclear warfare, and the Red Scare.

In 1950's New Orleans, John Blacksad gets hired by Jazz producer Faust to find the missing pianist "Slow Hand" Sebastian, a gifted pianist with a difform arm and an addiction to hard drugs. While looking for him, Blacksad gets entangled in a past pharmaceutical scandal - and all goes to Hell when the music stops...

Taking place immediately after the events in Hell, Silence, Blacksad is hired to deliver a Cadillac Eldorado to Tulsa. When it gets stolen by a down and out writer on the run from a murder, Blacksad finds himself in pursuit.