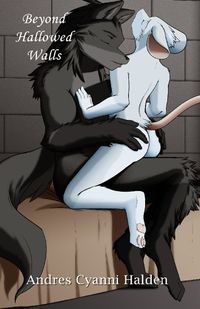 Cover of Beyond Hallowed Walls.

Beyond Hallowed Walls is a furry novel by Andres Cyanni Halden. It was published by FurPlanet in July, 2009,[1] and is the second volume in Halden's "Paladin Trilogy", following Within Hallowed Walls and preceding Transcending Hallowed Walls.

Set in the sword-and-sorcery world of Bestira, the Paladins of the Hopegiver have been called to save the country of Vasani; High General Takashi Ironskin, an ex-knight of the country and brilliant darkmage, has invaded, threatening the lives of millions of innocent people.[1]

With his powerful magic and undead army, no normal weapon can slay the General, so the paladins have traveled in different directions to reassemble the Light of Creation, an ancient weapon originally crafted to kill a god. It is up to Acton, Mier, Vorel and Rasvim to track down the three pieces of the weapon and bring them to Vasani in hopes that they can stop the darkmage before it is too late.

Torr, the snowcat paladin, must remain in Eldere as the acting Head Paladin of the Hopegiver, helping the poor and watching as General Ironskin's armies advance. Acton, a mouse, must go to the Dark Isles, his original homeland that he escaped so long ago. Mier, a Wolfen and Acton's lover, takes a journey back to the Wolfen Valley, even if his own people will not welcome him. For the final piece, Vorel and Rasvim - a married wolf and fox - head East in hopes of finding safe travel to the otter nation of Shin-se.