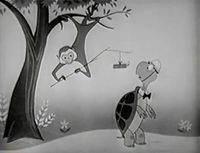 Bert the Turtle, about the duck and cover.

Bert the Turtle is an anthropomorphic turtle who featured in the United States civil defense film Duck and Cover.

Duck and Cover was a film produced in 1951 by the United States federal government's civil defense branch, in response to nuclear testing by the Soviet Union. The movie was shown in schools, to make people aware that nuclear war could happen at any time without warning, and to increase public awareness of the government's suggested "duck and cover" response to an A-bomb going off nearby.

Duck and Cover was written by Raymond J. Mauer and directed by Anthony Rizzo of Archer Productions. Schoolchildren from New York City and Astoria, Queens, New York were filmed for the production, which was first shown publicly in January, 1952.

The film is a little over nine minutes long, opening with an animated sequence of about a minute-and-a-half, in which Bert the Turtle is shown walking down a road, carefree as he picks a flower and smells it. Over this, a chorus sings:

While this is being sung, Bert is attacked by a monkey in a tree, who uses a stick and piece of string to dangle a stick of dynamite near Bert's head. Bert reacts by ducking into his shell; when the dynamite explodes, the tree is a charred wreck and there is no trance left of the monkey, but Bert is unharmed because of his quick actions.

The narrator instructs the viewers to remember what Bert the Turtle did, and the animation gives way to live action. The rest of the film discusses the effects of the atomic bomb, and the recommended course of action ("duck and cover") in the event of a nuclear attack.