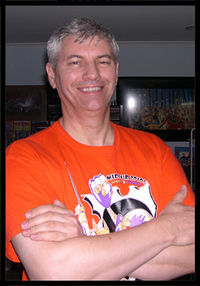 Bernard Doove, also known as Chakat Goldfur (born in September 26, 1957),[1] is a furry artist and writer who lives in Victoria, Australia.

Bernard Doove 's best known as the creator of the fictional species the chakats. He was the Head of Exhibitions at the Melbourne furry convention, MiDFur, which included the Dealers Den, Art Show, and Charity Auction.

Bernard Doove is also a prolific author, and his multiple story lines span dozens of stories. His novels, Life's Dream and Flight of the Star Phoenix, won the 2007 and 2012 Ursa Major Awards for Best Anthropomorphic Novel. He is also the editor and publisher of both versions of South Fur Lands, and the webmaster for the Ursa Major Awards site.[citation needed]