beeps (also known as Kim Grey; previously known as Alexander Grey) is a transgender furry and brony best known for running meet ups and websites relating to the furry and My Little Pony fandoms.

beeps joined the furry fandom in May 2006, having originally discovered the fandom in November 2005. It formally announced its departure from the fandom in July 2012[2], however returned under a new alias in May 2017. It had stated some months prior that its reason for leaving initially was because of receiving "a significantly higher dose of fandom toxicity than most other furries would" and that it was willing to give the furry fandom "a second chance."[3]

beeps founded The Furtean Times and associated group Furry Media International in January 2007, intending to create a free, online fanzine. The Furtean Times eventually evolved into a news and magazine oriented website under the name FurteanTimes.com. The site closed in November 2010 following an extended outage, with the majority of the service's content being archived on Flayrah.

The Furtean Times had some exposure outside of the furry fandom after appearing in the BBC News Online's article "Who are the furries?" beeps was additionally interviewed by The Guardian for a similar article, however this piece was never published.[3]

beeps operated as head of design for MyFursona between December 2007 and April 2009, after impressing the site's staff with a conceptual redesign of the site. Joining only two months into the site's existence, it was involved in the site's early development and first redesign, and spearheaded the initial MyFursona Eden project to redevelop the service from scratch.

beeps eventually rejoined MyFursona in its previous role after the site closed for redevelopment.[4]

beeps was a frequent attendee at MancFurs (then NorthernFurs) meets between 2007 and 2009, some of which it assisted in running or acted as a fursuit handler. It was also the co-organiser of the Manchester fatfur meets with Little Wolf and held numerous private house parties during this time. It currently attends BristolFurs meets.

The Furry Guru debuted immediately afterwards as an alternative means to answer fandom-related questions without the backdrop of ongoing drama. The name of the series was derived from a YouTube feature that existed at the time where user accounts had to belong to a particular category, one of which was "guru." The Furry Guru received an overall better reception than its predecessor and was credited for welcoming new people to the fandom, notably Tamias, a long time fandom spectator. The series ended in March 2008 after 32 videos.

beeps was a moderator for The InflatioNation from June 2007 until the forums closed later the same year.

It became a WikiFur curator in June 2008.

beeps founded the Darn Blimps Minecraft server in February 2011 before selling it on in November 2012. It continues to maintain an archive of the server on a dedicated website.

In 2021, beeps created the UK Furs and Star Trek groups on barq. The latter group later expanded to include a Discord server, co-managed alongside Nacyle.

beeps became involved in the brony fandom in June 2011.

It founded the Bristol Bronies, later Severn Bronies, in July 2012. The group holds weekly socials and events in south west England and south Wales in a similar vein to furmeets. The group was featured prominently in a cultural piece by the Bristol Post on April 9, 2014[6] and numerous BBC programmes—including Inside Out[7], the Jeremy Vine Radio 2 show[8] and Points West[9]—in October 2017, which garnered significant media coverage in itself.[10][11][12] beeps currently serves as the managing director of Severn Bronies Ltd.

It created placeponi.es, a placeholder image service for website developers. 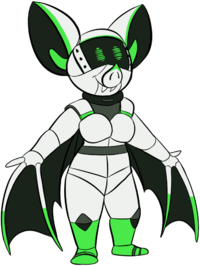 beeps maintains a number of OCs, with Emy acting as its current fursona. It has previously used Tori and Alexander as fursonas, from May 2006 to July 2008 and July 2008 to July 2012, respectively.

beeps' characters have many common traits between them including largely monochromatic fur and hair colours, and frequent use of the colours orange and magenta in accents and accessories.