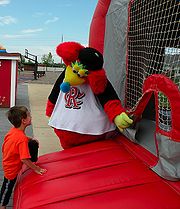 Rascal at a Pre Season Game at TR Hughes Ballpark 2007

Bedtime got his start as a professional mascot through the Missouri River Otters of the former United Hockey League back in 2005 as a backup/community mascot and has not stopped performing since. He has done professional teams in both Missouri and Illinois across sports including baseball, hockey and football. His favorite being Hockey. As of 2016, he has performed in well over 3,000 professional sporting events.

As a furry he joined the fandom officially in 2003 with his first convention being Anthrocon 2004. At AC 04 he got his first chance at wearing a big fuzzy costume when he performed with Rapid T Rabbit on stage doing "We Built This City" By Starship. He has been in the fandom actively since then, and has recently started taking on more and more staffing roles at conventions to bring his experience and expertise in the mascot world to furry conventions. 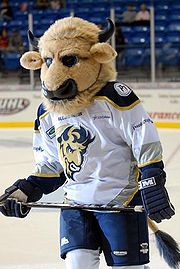 Chip the Buffalo at US Cellular Coliseum 2006 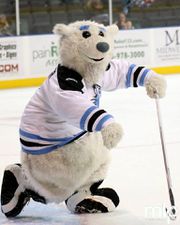 Bedtime has been involved in the furry fandom since 2004 and he made his mascot/furry debut as "Tenderheart Bear" of the Care Bears at Anthrocon 2004 performing in the Masquerade that year with Rapid T Rabbit doing some guitar to Starship's "We Built This City." Bedtime has also done Care Bear appearances with Rapid T. Rabbit in the Ocean City DooDah Parade.

Bedtime is also the Fursuit Lead for the new Gateway Fur Meet in St. Louis as well as a fursuit assistant on Staff for Mephit Fur Meet Bringing his professional experience as a mascot to furry cons in recent years.

After largely being an attendee in his early years of being in the fandom, he has started to reach out and take on more responsibilities at conventions, including working with Security, Video Gaming, and Fursuit Tracks.

Oscar the Otter hangs out with Mike from 92.3 WIL in St. Louis the Event Coordinator 2006