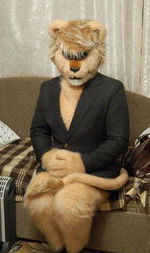 Basil often portrays himself as a lion. He is one of the oldest active members of Ukrainian furry fandom, is chairman of WUFF (formerly UA Furence), is a senior staff member of Eurofurence (dealing with the fursuit lounge), and runs a local furry-oriented website (furry.org.ua). For a long time, Basil has actively participated in Rusfurrence (an annual furry convention held in Russia), and attended ČeSFuR, Gdakon, and Eurofurence.

Basil Lion is a fursuiter, having built fursuits of his own. His main character is Basil Lion[2], a generic full-body toony-style lion built in 2003, which made his first appearance at Rusfurrence in 2004.

In 2010, in collaboration with Sorrow, Basil built Sofia,[3] a lioness. Sofia was built for Belo4ka, and she first appeared at Eurofurence 16 in 2010.

Basil has built a number of suits, all of them on a non-commercial basis.

Basil Lion is fond of The Lion King and other Disney animations, and was an active member of the TLK fan club of Russia. His first appearance at LionKing.ru meetings was in January 2001. He is a great fan of Chronicles of the Pride Lands, a Lion King-based fan fiction by John Burkitt and David Morris.

Outside the furry fandom, Basil is best known as a UNIX system administrator, freelance PHP programmer and digital photographer.