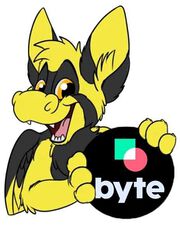 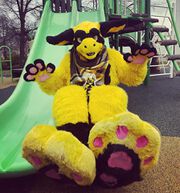 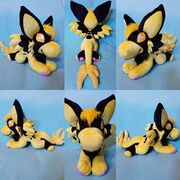 Barry's plushie made by Wonderland Art in 2018

While fursuiting, he also wears a scarf coloured black, yellow and white on his neck. He also carries along his custom made fursona plushie made by Wonderland Arts in 2018.

He has over 20+ various custom made scarfs that he wears while fursuiting.

His hobbies are playing Xbox, camping, playing the trumpet and making Tik Tok videos. He loves eating Mexican foods and and reesie cups. His favourite drink is Dr Pepper. His favourite outdoor activity is fursuiting.

In 2014, Barry was introduced by his deceased brother Kyle Baker to the fandom.

In 2014, Barry's fursona was created in loving memory of his deceased brother due to a rare childhood cancer when he was 18 at the time. The fursona was based on Batman character that his brother was a big fan of it to remember him as a part of the family. The fursona was also based on tooth less from How To Train Your Dragons Disney animation show.

He is colored black and yellow, hyperactive and filled with joy.