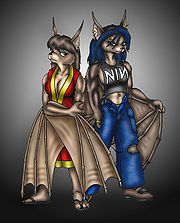 Bambi and her little sister CeCe, as drawn by Carlito

Bambi is a fruit bat character created by Joshua The Samurai for the online roleplay Bambi's Bamboo Bar Bambi is one of the more popular recurring bat characters, even though she prefers the term "Flying Fox" and is often addressed as "Foxy" by her friends. Currently Bambi is the star of the roleplay, and its most popular character.

Joshua admits he designed the character after Zoe Nix, a bat character created by Slippy for his Extinctioners fanfiction. Joshua liked Zoe, and when he began writing his own fanfiction, early stories included a more perky, and cheerful version of Zoe he named Bambi the Bat. She featured a fox-like appearance and was for an unknown reason, always wearing a kimono. After the brief appearance, the character drew attention, Joshua began drawing Bambi regularly, and then Carlito began creating his own fanart. Soon, Bambi became popular enough to spawn her own, independent storyline in the form of an online play-by-post roleplay.

Bambi was born in Brick, New Jersey on 14 February 1979, though at the time of the roleplay she is 26 years of age. At age 18 Bambi ran off to New York city, where she lived with friends and worked as a model while attending culinary school. Much of her life in New York is a mystery, but it's known that she quit culinary school at age 20 and used the money she earned modeling (Apparently quite a sum) to buy a run down old steakhouse and turn it into her current business. She makes a fairly good living just from the furs that stop by to see her in a short-cut silk Kimono. She started dating her current boyfriend Lemon ReNero when he came into the bar every day working on his laptop. She asked him out on a dare from Anita (one of her waitresses) and years later the two's romance is still the center of the roleplay. 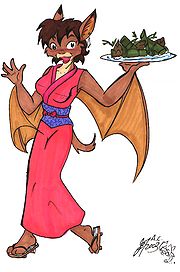 A 3rd generation Brazilian, Bambi speaks fluent Portuguese and enjoys practicing capoeira as a hobby. She is infinitely cheerful, and tolerant of her gawking customers up to a point, but has enough attitude to stand up for herself. She loves to cook, and even though she isn't officially a cook at the restaurant, she invented the bamboo-based cuisine and wrote the recipes. She loves Hong Kong action films, and in the roleplay she had a serious crush on Carter Wong. Bambi favourite foods are Bamboo shoots, deep-fried plantains, and apples. She can almost always be spotted wearing a kimono; they have to specially tailored because of her wing membranes, along with all her clothes. He wings are one of her most sensitive areas, and she likes to have them rubbed, though she tickles easily. Bambi can fly using her wings, and often flies as an exercise at a local gym.

To make the roleplay more immersive, Joshua the Samurai gave bambi a real, working e-mail: Bambibat@cheerful.com where she can be contacted with fanmail. At one point the bar had a website, but it was shut down. In a surreal moment, Bambi herself has submitted posts to her own online roleplay. Bambi appears to have an account on FurryMUCK, though she does not appear to be a regular visitor.