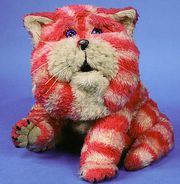 Bagpuss, the main character of the show.

Bagpuss was a British children's television programme created by Peter Firmin and Oliver Postgate. It ran from February 12 to the May 7, 1974.

The mice fixing an object while singing "Sumer Is Icumen In".

The episode starts with a series of sepia photographs, and Emily bringing an object home to Bagpuss, who would take a look at the object. The mice then come and look at the object while singing a version of "Sumer Is Icumen In". Throughout the show, Madeline and Gabriel play music.

The mice on the mouse organ.