From WikiFur, the furry encyclopedia.
Jump to: navigation, search
Community > Events > BC FurBQ

The BC FurBQ is a furmeet that started in 2006 as a small backyard BBQ camping trip in British Columbia. The attendance in 2007 was expected to rise, so the location was moved to a more open camping area between Kelowna, BC and Vernon, BC. Events include outdoor games, a raffle, swimming, body painting, art sessions, fursuiting sessions, nature hikes, and various other organised activities. 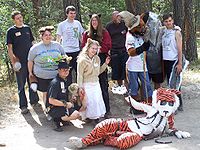 As the name suggests, the FurBQ also consists of a massive barbecue dinner, generally occuring on the second night of the convention.

Some of the events that have occurred at FurBQ include: 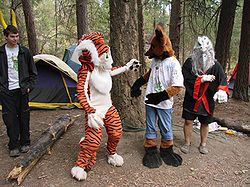 Locations of past events[edit]

Tire is the official mascot of the BC FurBQ. He was named 'Tire' because he IS, in fact, an actual tire.

Tire was discovered on a late-night trek by a team of sleepless furries from FurBQ 2006. After being rolled down various hills, balanced on, and pushed all the way back to the FurBQ site, it was decreed that he would be an integral part of FurBQ, and there was much rejoicing and excitement among the furries who were still awake at this late hour.

The phrase '<3 Tire' or 'Heart Tire' was dubbed by Kaji in 2006, and has now become Tire's official catch phrase. There have been rumours that T-shirts with these words may be printed for upcoming FurBQ events.

Tire was taken with furBQ's head cook Copper Wolf to Alberta at the end of FurBQ 2006. Over the next year, Tire began the long journey back to BC, where he felt he belonged.

Tire goes by the fursona name 'Bob', although he uses both names interchangably. 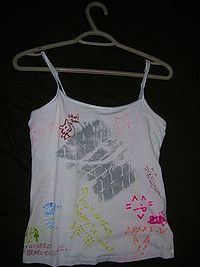 During the setup of FurBQ 2007, Sephren, Teolik, and Keichimaru went on a pirate's journey to scavenge the land for treasures. Along with an old Barbecue lid, a metal garbage can, and an entire VCR, Tire was discovered wandering the wildlands of Vernon, BC! There was much joy from Sephren who dove down a steep embankment to embrace him, and this inspired many confused looks from the other two, who had not heard of 'Tire' before. Needless to say, it was a joyous reunion when members of FurBQ 2006 were reunited with Tire during FurBQ 2007.

Tire participated in shirt signing at FurBQ 2007, as well as campfire circles, body painting, and other events. It is here that Methadone helped Tire decide that he was best represented by a fox fursona.

When it came time to leave, Tire was strapped to the roof of one of the fur's cars, but Tire was not content with such confinement. He escaped his bonds, and rolled off down the hill to be in the wilds of Vernon once more.

Eventually, he made his way to the home of SheWolf, and was expected to reappear at FurBQ 2008.