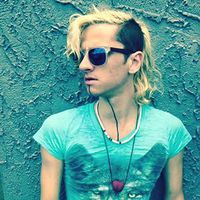 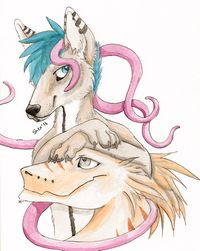 Axle (the character) was born a fusky but after various encounters, he's gained shapeshifting abilities, tentacles, and unique biology.[3] After one particular encounter his tail gained sentience and was later named Zenyx.[4] The Zenyx character also has his own social media profiles on various sites and expresses a more dominant personality. Axle is described as an "eccentric vagabond" and is homeless, living off of other people.[citation needed]

Axle considers his fursona a complex metaphor for his struggles in life and what he worries he might become.[citation needed]

Most commonly known as Axle, he frequently changes suffixes. This is usually done to denote what form he is currently taking but is also used for comedic effect. This sort of name changing is most common over IRC, Twitter and Telegram. He wears a badge that has 49 different versions of his nickname on it in reference of this.[5]

Axle has been DJing and making his own music in a variety of electronic genres since mid-2008.[6] He has been releasing most of his music via Soundcloud and DJ mixes via Mixcloud.

In 2010 AxleFusky recorded an experimental album under the name Music For Deaf People using KORG DS-10[citation needed] and burned 35 copies which he handed out to friends and family.[13] A year later he recorded a second half to the album which went unreleased until 2012 when both parts were uploaded to his Bandcamp account.[14][15] Stylistically, the project can be described as a combination of dark ambient, noise and space music.

Since November 2014 he has been releasing a monthly DJ chart on Beatport called Tracks Of The Month[16] which was later expanded into playlists on Soundcloud[17] and Spotify.[18] In June 2016, a podcast was started for the series with the first episode uploaded to Mixcloud,[19] and later episodes on iTunes.[20] The show also features new & unreleased tracks produced by Axle.

In January 2017 It was announced in the podcast feed that the show would be put on temporary hiatus until further notice.[21]

On the August episode of his Tracks Of The Month podcast, Axle announced a new Progressive House & Techno alias called Irreversible by debuting a song titled "Lost In Translation" at the end of the show.[22] Distinct social media accounts for the alias were launched on Facebook[23], Soundcloud[24] & Mixcloud[25]. On May 5, 2017 Axle played his first DJ set under the name, warming up for Trance duo Gabriel & Dresden[26] and on September 18 the first official release from the project "Schlieren Textures" came out on a compilation from Suffused Music.[27] On January 16 2018 "Lost In Translation" was released on Neoteck Music alongside remixes by Vadim Ketsky & Edvard Hunger.[28]