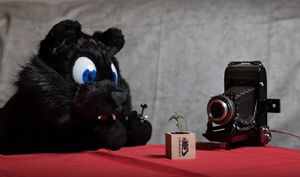 Atkelar (born 1975), is an Austrian puppeteer who does short comedic pawpet video clips. He also is known for doing restoration projects and doing builds. Atkelar prefers to be known to the fandom only by his fan name to avoid real life run-ins with trolls.[1]

On the Anthrochat IRC network, he can be found as a semi-regular visitor in the #eurofurs, #furry, and sometimes the #fursuit channels. He usually remain quiet since his policy is not to say anything if he has nothing constructive, or at least funny, to add to the conversation.[citation needed]

Atkelar's fursona is a black cat with blue eyes sporting a pony-tail hairdo, and a silver earring in his left ear.

Atkelar has attended Eurofurence 14, although health problems prevented him from being active more than three or four hours per day. He came back for Eurofurence 15 where he hosted a panel about video production (listed as "Video Editing"), and had the Al Shepherd character (Folkmanis sheepdog puppet + self made hat),[clarify] run up and down the registration line, filming with a pawpet sized camera.[citation needed]

At Eurofurence 16 he hosted two panels: a repeat of the video editing panel and a pawpet roundtable.

In early 2014, it was announced that Eurofurence 20 was looking for people capable and willing to step in for Thalian to run the con's popular fursuit photoshoot and take over the photography department from him. Having not enough time to handle the job on his own, he joined forces with NewEinstein to set up a new photography department[2].

In 2014 he was invited by NewEinstein to handle the official con photography for NordicFuzzCon: the Fursuit Photoshoot and the convention group pictures: Fursuit group and attendees.

Aside from the pawpet videos, Atkelar does other things such as playing around with traditional media and digitally with Photoshop.

In December 2008 Atkelar decided to try out podcasting, created a channel on PodBean.

In 2010 he created a 3D animation video, essentially just to try out that artistic field. He was looking for a possibility to create short animated episodes using the same characters and a minimalistic style to speed up the process. Thus the idea of Frucosiadas (see YouTube channel) was born; anthropomorphic cough drops that have a starfish like shape and slightly translucent body, yet no facial features. The name was again found by using a random name generator and fixing it up a bit for pronunciation.

In late 2011, more precisely at Eurofurence, the idea of an "made in Austria" furry video with some more production value than the usual music videos lead to the creation of "Dog's Life". As of early 2014 two episodes have been made, showing the life and antics of Dog the Dog in black and white silent film style. They can be found on Atkelar's channel on both YouTube and Vimeo.

As of 2019, Atkelar has been active on various building and restoration projects. He commentates on what goes on during each project with a puppet resembling his fursona.