At Arm's Length is a furry webcomic by Darkwing Dork and Brooke Scovil concerning three sorceresses living incognito on Earth, keeping their status as magical beings hidden from their mortal husbands and society at large while also defending the planet from malicious magical threats.

The comic deals frequently with multifurry and transformation themes.

Ally, Sheila and Reece are members of a naturally four-armed magical race named Enchanters, who came to Earth and have come to love and embrace the culture that their magical civilization shuns. They have taken it upon themselves to try to bridge the gap between both societies. However, it's too soon to share their true origin with the rest of the world, including their mortal husbands. For the time being, they must keep their background and even true appearances under wraps.

Unfortunately, there are malevolent magical beings who threaten mortals, and Ally, Sheila and Reece have vowed to defend their new home world from non-mundane threats. They must balance their self-appointed role as defenders of Earth against magical threats while also maintaining their relationships with their mortal husbands. Just how long they can juggle these two tasks remains to be seen.

Along with typical adventures in the mundane setting, Ally, Sheila and Reece frequently meet social outcasts such as the inhabitants of the Haven, a refuge center for victims of magic and socially undesirable magical beings hidden on Earth and run by an Enchanter named Selinda, herself an exile. Due to their adventuring hobbies, they also make acquaintances with member other magical races like dragons, kitsunes and naga.

The tone of the stories alternate between action, sitcom-like home events and fantasy. 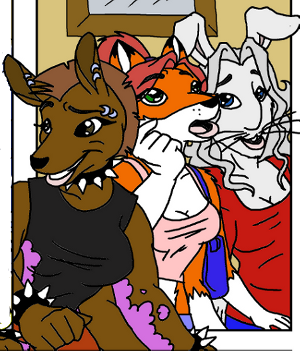 Sheila, Reece and Ally sharing a moment of levity