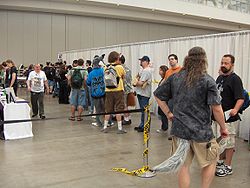 It can take some time to pick up art

An art show is an event for displaying a set of artwork, such as paintings. An art show generally involves an aspect of novelty: works may be newly created, by a particular artist, or brought together to a certain location for the first time. Some art shows offer the works on display for sale. 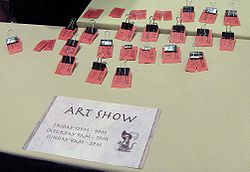 Prospective bidders must leave their bags at the entrance

The art show is an important part of most furry conventions, showcasing works by anthropomorphic artists. Works at a convention art show are almost always for sale, usually by silent auction. Such art shows are followed by an art auction, as a means for prospective bidders to vocally compete for items they might be mutually interested in.

Sellers typically set a minimum bid. Some art shows will also offer the option of a direct or "quick sale" price, usually higher than the minimum bid value, whereby the auction process can be bypassed and the item is immediately sold. There might also be a "second chance" sum that can be paid after closing.

Mature artwork is usually permitted in an area from which minors are excluded. If sold at voice auction, it is likely to be separated from the sale of general pieces.

Procedures for closing bidding at art shows vary. Conventions with larger art shows may perform a "sweep" through the show to clear out all bidders zone by zone. Those shows with a voice auction may force items to go to it after a certain number of bids. Others allow competing bidders to remain until the highest bid has been made.

Once the room has been cleared the final bids are recorded and buyers are permitted back in to collect their pieces. This may take a significant amount of time depending on the size of the show. Unclaimed pieces may be shipped at the bidder's expense, or returned to the seller with their unsold pieces.