ArtRise (alternatively ArtRi-se or "Art Rise") is an upcoming art gallery and social discussion site currently under development. The project began under the name "ArtistEden" in November of 2018.[1]

ArtRise is described by its development team as having a group feature similar to that seen on sites such as DeviantArt or SoFurry, forums or a discussion page, detailed NSFW filters, a commissions tab on the user's profile page, multiple image uploads, user-generated thumbnails via the site's submission page, premium memberships, and private profiles.[2] Profile customization has been developed with DeviantArt and Toyhouse's customization features in mind. An on-site currency has been occasionally discussed with the staff confirming that such a feature has not been planned currently.[3]

While ArtRise is greatly welcoming to the furry community, the project strives to be a site for all types of art in very much the same way as DeviantArt, including not only art depicting humans, but also writing, photography, and more. 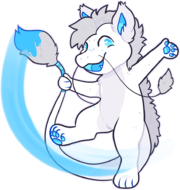 Canvas the dragon, drawn by Mellochi on DeviantArt
ArtRise's mascot is a white 'noodle dragon' named Canvas who can become whatever an artist desires them to be. They are covered in blank, white feathers or fur that an artist can draw and paint on much like an actual canvas and their tail is frequently used as a paintbrush.