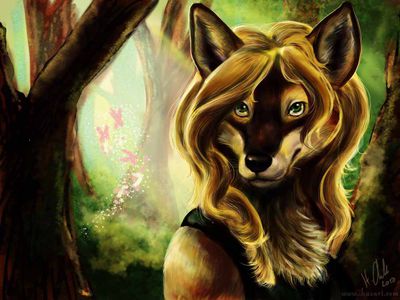 Arrow's work is often described as painterly as it is often bold and unrefined which is a strong indication of her Fine Art background. She works with all mediums available to her and also dabbles in some crafts. She enjoys creating pin-up work but also loves to create illustrative pieces with a story behind them which often develops into short comic strips.

She has recently been working on her own projects including the comic D.E.R.P. which will be re-released on the internet soon. D.E.R.P. is a non-furry comic is short for Dead Eating Reanimated Persons, which follows a satirical re-imagining of her move from the UK to Canada in order to escape a Zombie Apocalypse.

She has also worked on concepts and illustrations for individuals and small gaming companies.

In the future she plans to collaborate with other artists and writers to create more furry goodness for the community. She also plans to work on art work that she feels could make an impact or at least create awareness for certain endangered species and helping the environment as a whole.

Even though being in the furry scene since she was young, it has only been since 2008 that she has actively participated in Furry outside of the internet. This includes having her work printed in the first edition of Furoticon, starting commissions for local furries and attending Islington Fur Meets.

She also found her way on Convention Committee for Furnal Equinox 2010, organizing the dealers den for the conventions first year. In the second year of Furnal Equinox she stepped down to staff to lay off the pressure and in 2012 she stepped down again to just a Volunteer in order to make more time for her art career. Each year she has provided graphical elements and advice for the convention, including but not limited to T-shirt art for 2010, Volunteer badge art for 2010 and 2011, and has been published in the convention book every year including inside cover art in 2010 and 2012. Although her roll in the convention is now minimal she can be found in the dealers den working at her own table and at the convention Merchandise table.

In 2012 she worked with Thadius Effingham to produce the cover art work for the Frenetic Ramblings sequel, Frenetic Ramblings 2: Stories from a Fandom. This was sold at Furnal Equinox 2012 and sold out in 24 hours. Thadius and Arrow plan to work on more projects together in the future. 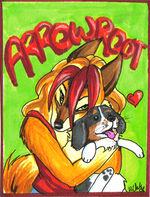 Arrowroots first conbadge, made for Islington Furmeet 3 (2009), in memory of her dog, Poppy, who died 2 days beforehand.

Arrowroot represents herself as a short blonde fox with red bangs, brown ears, and a brown stripe across her nose and under her eyes. She has also been known to draw herself as a lemur/fox with the same hair style. Her eyes are always green.