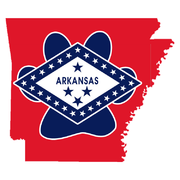 Arkafur's logo
Arkafur is a furry group, based out of North Little Rock, Arkansas, USA. Their goal is to provide an environment of acceptance and fun for all those involved, and accepting all furres no mater their gender, sexual orientation, fursona, or age. They were created on Aug 16, 2010 with just 2 members; a furre couple who couldn't find a group locally that met their needs.

The interview process to attend Arkafur's meets is done in order to protect it's members from potential problem members, however all members are more than welcome to join the yahoo group and the forums. This interview will be done in a public place, like a coffee shop or other similar setting. During the interview, the founding member(s) will make sure that the applicant understands the rules and answers any questions that the applicant has.

At this time, applicants under the age of 18 may also turn in their consent forms. Only one form needs to be filled in, per applicant. Unlike permission slips for school, these are not limited to just one meet. They will be kept on file by the founding members for reference.

At the end of the interview, the founding member(s) will inform the applicant if the are/n't accepted. Because of the interview process, only members are allowed to attend meets.

If a member has been approved to attend meets and they are found to disrupt the meets frequently(3 or more meets), they will be asked to no longer return to the meets. This will be on a warning system manner. A couple examples are as follows (but not limited to) Starting/participating in a loud fight/disagreement or bringing a non-member to the meets.

All members must follow the posted Rules of Conduct.

Arkafur works on a 3-strikes warning system. These warnings, if no disruption has occurred in 6 months, will be taken off, one warning per six months. After three warnings, the user will be asked to not attend meets for a period, to be determined by the founding members at the time of the third warning, depending upon the disruption that caused said warnings.