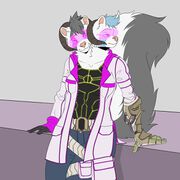 Juniper M. P. R. A. A. K-M. System, a transgender non-binary plural system (who are sometimes known to use these names in real life: Arki, Arla, Aoife and Meredith, as well as the character names Fiscal, Nicolyrezk, Benzene and Quench) has been a systems administrator and software developer on various furry websites, some of which it founded or co-founded. It resides in the Seattle suburbs in Washington, USA.[1]

Juniper has publicly stated that it is Otherkin, but used to joke that it was "suffering from delusions" from time to time, due to the social stigma surrounding Otherkin and Therianthropy. It is a shapeshifter with many varying guises. Usually it is a Skandark (a two-headed red panda/skunk goo/demon hybrid), but others in it's system include an opossum/red panda, a skunk, a sheep/werewolf and a grey-furred red panda.

In the land outside of the vast, bizarre Internet, Juniper is a rather diminutive person of mostly Irish descent. It spends its days working on new and exciting projects for Malice Labs, as well as pursuing a career as a photographer, videographer and freelance journalist. In the past it has worked on a number of projects such as e621, Fur Affinity and F-List in its free time. Whilst many online find it to be a rather exuberant and outspoken person, in real life it is quite introverted and shy.

Juniper has helped to host a number of websites for individuals, groups and small organizations, both furry and not. In the past it helped to stream FBC content and, after assisting with rebroadcasting and archiving 2 Sense, moved to occasionally broadcasting shows. It was the founder of ArtPlz after the breakup of Fur Affinity, at which time it withdrew its hosting following a managerial disagreement with Fur Affinity's founder and administrator Jheryn Lightfoot. ArtPlz itself also saw some drama after it developed ChanPlz, an Fchan clone for posting furry art. Several volunteers withdrew their support for ArtPlz, such as Arshes Nei stating ethical reasons for doing so. ChanPlz was taken down a few days later by Juniper and others involved in its creation.

Juniper was also an administrator for and the systems administrator of WTFur, a mature furry image board much like Fchan, but quit due to a large amount of racist and antisemitic content it was prevented from doing anything about. Disillusioned with the projects of others, it subsequently came to create, own, run and maintain the furry community e621. As of August 31, 2010, it no longer runs e621, due to false allegations of the site hosting real-life Child Sexual Exploitation Material (CSEM) made to the FBI, it had to spend many months proving otherwise. It did so, however, but the stress led to a hospitalization and it decided to give the site to someone else to continue the work. The site's data was transferred over to Varka when he offered to take over the site.

The last project Juniper was involved with was F-List and it was one of the developers who helped to write F-List alongside Hexxy, providing code for new features, security updates and bug fixes up until the incident in 2011 with Zidonuke happened, at which point it decided that it didn't want to work on the project any more, as it believed the site was moving away from its own interests once it came back online.

It has not worked on any furry projects since, moving away from the fandom and into other non-fandom areas, such as covering civil rights protests, supporting mutual aid networks and in general, aiding other journalists, minority communities and the homeless populations in its local area, the larger US and beyond.