Arcturax is a Kitraxian (An anthro batgryph is the best description for this species) who is active in several areas of the fandom. He has been part of it since about 1998, first posting in the usenet group alt.fan.dragons, and is on Faibanx as well as FurryMUCK and formerly Alfandria MUCK.

Arcturax is a fursuiter and has been involved in masquarades and variety shows in his fursuit. He also enjoys cooking and has cooked at Morphicon picnic and for the Pittsburgh Fur-B-Que. He has performed standup comedy at the Atomic Comedy Hour of Doom at Morphicon in 2006 and 2007.

Arcturax is currently working on a furry work of fiction, which he seeks to turn into a series of animated films someday.

Arcturax is the current owner and administrator of Alfandria MUCK. 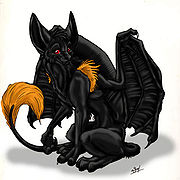 Azrael is a character played by Arcturax on several MUCKs including Alfandria, Tapestries and Second Life. She is a batgryph, a mix of bat and gryphon.

Azrael is about 35 feet (10.6 m) long and 20 feet (6.1 m) tall when standing up on all fours. She has the body of a gryphon-like creature with large fuzzy hindpaws covered in soft black paw pads much like the foot of a lion. She has large, black leathery wings on her back, and is covered with soft black fur over most of her body. Just in front of her wingjoints and behind her shoulders are two large puffs of orange fur. Her long tail also has a little orange fluff at the tip of it.

Azrael's forearms are fur covered, but her paws are more birdlike and covered with only a short fuzz and her palms are covered in a single large pad which covers the palms and fingers with no gaps. At the end of each digit is a short black talon which appears to be useful for climbing and holding down prey. Lastly, her head is rather foxlike other than her large somewhat batlike ears and her fangs, which are arranged more like that of a bat's.

While Azrael doesn't look too birdlike on the outside, with the exception of her forepaws, she does contain quite a few birdlike internal structures. Like many birds, she has a complex digestive system comprised of a crop, a stomach and a gizzard. She also has a fairly flexible backbone, which allows her great agility in the air and to make turns that would normally break the back of more rigid bone structures. This gives her a bit of a way to make up for her large size when pursuing much smaller prey. However, she has a fully mammalian reproductive system and does not lay eggs. Lastly, she has very simple echolocation and can use it to pinpoint and even in some case, stun prey. Her echolocation is susceptible to being fooled by phantom echos, accoustic shadows, and other forms of audio interference. 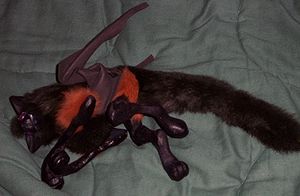 Azrael is more than simply a character, and actually has a physical presence in the real world outside that of her player. She actually originated as a puppet, which is pictured below, and was made by the Midsummer Night's Dream company. Azrael can often be found at conventions riding on Arcturax's shoulder and doesn't mind being pet in person.