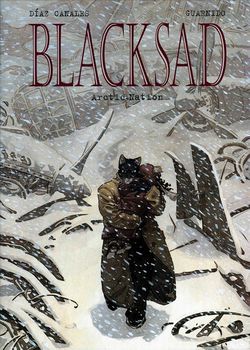 Beginning with a black vulture hanged in a street, John Blacksad meets his future sidekick, Weekly. Blacksad rejects him at first due to his unpleasant smell, and because Weekly mistakes him for a fellow tabloid journalist.

Blacksad is working for an old elementary school teacher, Miss Grey (a doe), to find and rescue a young bear girl, Kyle (short for Kayleigh), who was kidnapped, quite possibly by "Arctic Nation", a racist political organization similar to the Ku Klux Klan.

After becoming friends with Weekly through the latter's persistence, Blacksad is harassed in a bar by three Arctic Nation goons (resulting in one of them being thrown into the bar counter). Their leader, a white Arctic fox called Huk, turns out to be a close friend of the local Chief of Police, Karup (a polar bear). The pair is taken to Karup and he is shown to have some racial prejudice himself.

Blacksad subsequently confronts Kayleigh's mother, Dinah, about her daughter's disappearance, which she has mysteriously failed to report to the police. He suggests an affair between herself and the son of Oldsmill, a rich white socialite. This line of inquiry was prompted initially by Miss Grey. Dinah takes great offense at the insinuation, casting doubt onto its validity as a lead. In the following scenes, he and Weekly clash with a black activist organisation - the "Black Claws"—themselves originally accused of Kyle's abduction, and similar in their toughness to the Black Panther Party's doctrines. They force Weekly to publish a statement denying their involvement in the kidnapping. Blacksad then decides to follow the Oldsmill lead, but discovers that Oldsmill's son is mentally handicapped (the result, it is suggested, of the Oldsmill family's endogamy), and thus unlikely to have had an affair with Dinah.

In the meantime, Weekly investigates the activities of Karup's wife, Jezabel (again, a 'white' bear), discovering her affair with Huk and her emotional meeting with Dinah, in which she appears to blackmail Jezabel by threatening to reveal 'what she knows'. This compounds suspicion on Karup, already rumoured to be a pædophile. Blacksad then returns to Dinah's apartment to find her dead. At this point, suspecting Karup of the murder, he confronts him and his wife, whom he accuses of adultery. In consequence, Karup attacks Huk and argues violently with Jezabel: during their tête-à-tête, it comes to light that they have never had sex.

At the violent climax, a black, blind magpie called Cotten (complicit in the abduction and threatened into co-operation) leads Blacksad to an Arctic Nation meeting in a derelict war factory where Kayleigh - and Weekly, also having been abducted - are hidden. Blacksad saves Weekly from a gibbet after Karup is betrayed and hanged himself by Huk, supposedly for kidnapping and child abuse. As the factory burns and Cotten is shot dead by Huk, Blacksad rescues Kayleigh, along with Weekly. Later, he finds Huk dead in his garage - with a screwdriver through the brain.

The book's finale sees Blacksad cornering Jezabel after her husband's funeral, proving, through a matching birthmark that she is Dinah's twin : Dinah had brown pelt with a white marking on the chest, Jezabel is the opposite. Jezabel clears up the loose ends: her father was in fact Karup, who had abandoned her black, pregnant mother to die after being turned from a sweet, caring husband to a racist monster by the doctrines of the Oldsmill set. However, Jezabel's mother lived long enough to raise the twins, and, fuelled by revenge, Jezabel ascended 'white society' under a false identity, eventually marrying Karup. Revealing she was his daughter, she refuses him any intimacy and blackmails into silence by threatening to reveal that not only had he married a non-white-pelted woman, he had on top of that married his daughter after trying to kill his pregnant former wife.

With Dinah hired as their maid, Jezabel seduced and manipulated Huk, using him to carry out the fake kidnapping, thus capitalising on the rumours of Karup's paedophilia. Huk also spontaneously murdered Dinah 'to make sure she kept her mouth shut'; and so in the aftermath of Karup's hanging, Jezabel in turn killed Huk by way of vengeance for her sister. Blacksad then asks why did Kayleigh do to deserve that suffering, to which Jezabel, realizing what she did to her niece, doesn't answer.

Blacksad meets up with Miss Grey and compliments her on her dedication towards the neighbourhood’s children while the school's kids, Kyle among them, enjoy a snowball fight in the sun. After the two say goodbye, Blacksad finds Kayleigh sadly staring at him, and he stares back sadly as well. The book concludes by highlighting Kyle's innocence and her ultimate abandonment, but her fate is not made clear (we can infer that since she is still in the same primary school, her now rich widow of an aunt Jezabel became her guardian). The original book's third cover depicts Blacksad scattering Cotten's ashes to the wind over Las Vegas, Nevada, fulfilling his last wish.