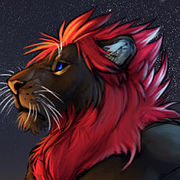 Arctacia's current appearance. A crop of the original work created by Rogue Liger.

Arctacia is a Western New York-born furry who currently resides in Madison, Wisconsin, U.S.A. His fursona is a Tythra Lion, a custom lion-based species whose full name is Arctacia Zol (pronounced: /ɑrktæˈʃʌ zoʊl/ or ark-ta-shuh zohl). The character itself is built around years worth of role-playing to a point where a mythos of it was necessary to help categorize and document the experiences, chronology, and information surrounding Arctacia and the universe he exists in.

In real life, Arctacia grew up in Western New York and was born in June of 1981. He then later moved out to Madison, Wisconsin in November of 2004 where he continues to reside today.

Arctacia has a pet named Shiro Wolf who keeps him as a personal affectionate and gaming companion and has had ownership of him since March of 2011. 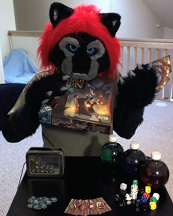 A picture of Arctacia in just his fursuit head and hand paws showing off his interest in board games.

For work, Arctacia is currently employed with TDS Telecom doing mostly data entry and has been with the company since June of 2007.

Arctacia enjoys PC gaming and board gaming regularly. He enjoys socializing with friends and likes to be an open and understanding individual with his interactions.

Arctacia has been in the fandom since 1998 when he came across Furcadia. From there, he started to role play a character called Arctic-Cat who was later described as an avatar of sorts to his main character, Arctacia. Most of his initial character development and mythos creation spawned from role playing on Furcadia regularly. Shortly after joining Furcadia, he began to make a series of maps called Arctacia Adventures. These series of maps allowed players to go through and solve puzzles while exploring distant lands that followed a plot. Later on this series was ported over to Neverwinter Nights, which allowed the trilogy to greatly expand on its story telling and presentation. His works of this are currently found on The Neverwinter Vault.

Arctacia currently hosts board gaming sessions with a small group of local furs each week for various games from Arkham Horror to Descent: Journeys in the Dark to Dominion to Settlers of Catan and many others. He also enjoys PC gaming and plays with fur friends online and will also occasionally host board games in a similar fashion by way of using Tabletop Simulator.

Arctacia's first exclusive furry convention was Midwest Furfest which he attended in November 2012 and continues to attend each year. He now has a tradition where he randomly hands out Lion candy bars to people. As result, a few people have begun to recognize him as the "Lion bar guy". Another furry convention that Arctacia tries to make each year is FurSquared.

A Fur Affinity page of Arctacia's Mythos is in continuous works by Arctacia himself. He currently does so in the style as if his character has lost his memory from a recent reactivation and is looking through logs to recall past events.

A mug shot of Arctacia's avatar in Second Life.

Arctacia occasionally logs into Second Life with an avatar that depicts his character for social interactions. He and his pet Shiro used to own and run a sim called The Neexi Realm, a distinct winter-themed place for hanging out, relaxation, and fun.

Arctacia commissioned a fur suit from Noble Wolf of his fursona in early 2012 and wears it on occasion at conventions.

Arctacia's fursona is a fictional creature called a Tythra Lion (sometimes simply called Tythran). A Tythra Lion is described as an artificially fabricated and engineered lion created by an ancient race called the Arctacians. The appearance of one, and consequently of Arctacia himself, is a bipedal lion that stands 8 feet tall with a light frame to their body. The majority of a Tythran's body is covered in thick black fur that is longer than normal for a lion's. Dark grey fur usually details parts of the muzzle and face. The mane and tail tuft are a bright red and usually somewhat frizzy in nature. The eyes are an interesting design; having a bright blue iris with black sclera. The iris region also glows faintly and is usually only noticeable in the dark or dim light situations.

Arctacia as a character is depicted as a creator of his own realm known as The Entirety. According to the Arctacia Mythos, a realm is a pocket of reality with its own set of laws pertaining to physics, elements, and other various things that would make up a template of this reality.

Arctacia is known for his magical talents, typically delving into invocations of ice and lightning-based magic and as such, has a natural resistance to these elements; as did other Tythrans as well. Consequently, fire-based magics are avoided as Tythra Lions have a vulnerability to this element.

To date, Arctacia is the last of his species and all others have been reported as deceased. He is also classified as a prototype of the Tythra Lions when they were initially created.