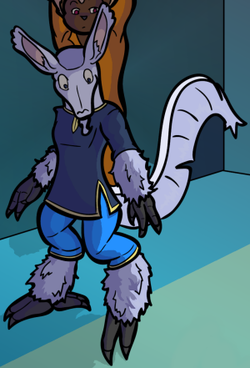 An Anyr (Silk of the Solar Winds, aka White Noise) standing on his hind legs.
The Anyr are a fictional alien equine species from the webcomic Last Res0rt.

Anyr have long, narrow ears with tufts at the ends, and thick coats with a wispy, voluminous mane, tail, and feather.

The Anyr talons resemble that of a modern parrot; black, scaly, and four-toed, with two opposing digits, giving them a 'two-thumbed' grip.

Anyr can walk on two legs, but run faster on four. In addition, because of their unique hands and feet, They are also able to climb most surfaces with greater ease than other species, especially thin surfaces such as beams and pipes which they can wrap their appendages around.

Most Anyr grow to be quite large, standing up to ten feet tall when on their hind legs.

Anyr are primarily an arctic species, specially suited to spacefaring life as they are less bothered by low gravity and unusual daylight cycles.

Because of these desirable traits, many space-bound outposts are manned by Anyr, or at least have a few on staff. Some communities of Anyr have been living at these outposts for several generations.