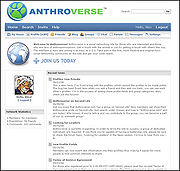 The term "Anthroverse" is derived from anthro-, which is a Greek-derived prefix for "pertaining to humans", but in the furry fandom, it is commonly used as short for anthropomorphic, which pertains to animals with human-like traits. The suffix, -verse, obviously attributed to the word "universe", is also a play on the word, "verse," which has musical connotations. The musical reference was a nod to Alex Cross' appreciation of music and the principles of harmony.

The introductory paragraph on the site reads, "Anthroverse is a social networking site for those who are interested and those who are fans of anthropomorphism. Get in touch with the animal in you by getting in touch with others like you. The interface is easy and joining is as easy as 1-2-3. Take part in the first, most intuitive and original furry social networking community on the web and get your voice heard."

Anthroverse was originally founded in June 2007 when founder Alex Cross created a Ventrilo server called FurTalk, which has remained active as of June 2008. Anthroverse was the name of one of the channels found on the voice-chat server. After receiving encouragement from active FurTalk members, Alex created a message board in July 2007, dedicated to FurTalk and its members even though active members averaged at around 12-14 users; most of whom were members of Yiffstar, a site that Alex was also a member of and had previously promoted the Ventrilo server on there for general usage.

The Anthroverse.com domain was registered in August 2007 after Alex felt that limiting communication to topics regarding the Ventrilo server was detrimental to site growth and progress. He admittedly created the site in hopes of creating a general furry community, but ultimately, he found that it served no purpose since he had not yet established a mission statement or specific goals for the site.

Anthroverse 1.0 solely consisted of a vBulletin message board and it covered a variety of topics of discussion and after spreading the word throughout sites that Alex frequently visited, the message board ultimately bottlenecked at approximately 25 members, but the site devised a plan to recruit more members.

In September 2007, Anthroverse decided to venture into Second Life in hopes of taking advantage of the popularity amongst members of furry fandom. Shortly after promoting Anthroverse in Second Life, the site quickly launched a forum section dedicated to Second Life. Tapping into Second Life proved to be a mild success as more members from Second Life joined Anthroverse. Some, most notably Zach MacHeel, would ultimately take the initiative of building a meeting place for members and paying for the land without any funding from the site.

In January 2008, Anthroverse was completely redone with a Drupal interface and extended profiles under version 2.0. Around the release of 2.0, the site was marketed as a community hub for active furries who wanted to network with others.

Alex decided to reestablish the primary purpose of Anthroverse after reading about the site, FURiends, which was a furry social networking site that was founded in July 2006 by RAD Moose. Without emulating their site, Alex discovered that furry social networking would potentially be a great investment, but he disapproved of the MySpace.com format, seeing how it appealed to the commercial, trend-based teenage demographic.

Anthroverse was promoted by word of mouth throughout the convention. In only two days after the convention ended, 50 members registered to join the site including members of Second Life. The site ultimately idled in inactivity and plans were once again scrapped.

On May 23, 2008, Anthroverse was reinvented with the assistance of Social Engine, which is an open-source social networking script. For the first time, Anthroverse became fully Integrated with a newly redesigned and recoded vBulletin message board.

On October 11, 2008, Anthroverse was upgraded to a slicker, more efficient design after three months of development hiatus.

On December 20, 2008, Anthroverse was shut down indefinitely due to lack of funds and user activity, but shortly after the announcement was made, Alex reached an agreement with Crypto to merge with his social networking site, Furspots.

Anthroverse operated solely on donations as an substitute for advertisements. One of Anthroverse's goals was to prevent third-party advertising from becoming a primary revenue stream, with the exception of known affiliates.

Members had the ability to create their own blogs with a WYSIWYG interface, and add comments to each other's profiles, with their permission.

CSS overrides could be used to alter users' default style sheets, providing a means to tweak fonts and colors.

Anthroverse members could post threads and replies on to the forum for everyone with an Anthroverse account to see. Some users chose to use the message boards as a service for networking with other users outside of the Anthroverse profile system.

Additionally, members could create public or private "social groups" within the forum that others can join. Group owners can also create their own forum for the group.