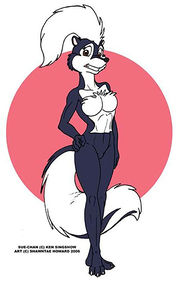 An anthroid, also known as a synthoid, is a furspeech term to describe an artificial furry construct designed to look, feel, and function just like a traditional organic being.

The word is the English counterpart to the word Android, a Human AI. It's not to be confused with a Cyfur,[citation needed] a cybernetic organism with both organic and mechanical parts.

The term was first coined by Japanese artist Ken Singshow as an interesting gimmick[clarify] for his creation, the Andorozon,[citation needed] five biomechanically enhanced female anthros that fought crime and got involved in many strange and sometimes humorous scenarios. However, their enemies, the Evil Cat Sisters, and their henchmen (cats?) are fully artificial.

In recent years, anthroid characters have been growing in visibility and popularity,[citation needed] due in part to the rising number of well-known artists and commissioners with robotic or cybernetic characters.