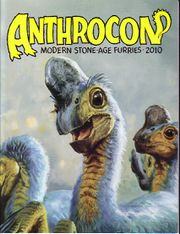 Anthrocon 2010 was the 14th annual Anthrocon furry convention. It was held on the weekend of June 24th to 27th, 2010[1], at the Westin Hotel and David L. Lawrence Convention Center in Pittsburgh, Pennsylvania. The theme was "Modern Stone-Age Furries".The charity was Fayette Friends Of Animals, a no-kill dog & cat rescue shelter.

Unlike years past, hotel reservations were not available until February 2010.[3] This was made at the request of many furries based on feedback from years prior. Despite a record load on Anthrocon's webserver at the opening of hotel reservations, it held up under the load.[4] After the initial rush, a breakdown of when various nights sold out was posted.[5]

The Guests Of Honor were James Gurney, author of the Dinotopia book series and Jim Martin,[6] puppeteer/director on Sesame Street.

Source: Anthrocon, Inc. Form 990 (description from Foundation Center)
Note: These financials provide just a brief overview, and should be considered in context. Each convention has its own situation, which may change from year to year. Special events (like art shows) that are part of a charity's mission are usually run at a loss. Conventions typically have many other expenses which may come to far more than those listed. Check the source for further details.